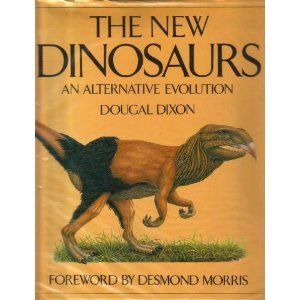 In “Alternative Evolution” of Dinosaurs Foresaw Contemporary Paleo Finds” (Scientific American August 10, 2011), Brian Switek surveys the great changes that have taken place in how dinosaurs are viewed, many of which may have been foreseen by Dougal Dixon, who thought he was writing a fantasy about how dinosaurs would have evolved, had they survived. Except that they happened way back then.

Though undeniably speculative when it was published in 1998, The New Dinosaurs was greatly influenced by the state of dinosaur science at the time. By the late 1980s the cultural shift in paleontology celebrated as the “Dinosaur Renaissance” was in full swing—images of slow, stupid, swamp-bound and drab dinosaurs were rapidly being replaced by visions of active, agile and vividly colored animals that were far more bird-like than previously imagined. There was even a growing body of evidence that birds were the direct descendants of dinosaurs, and Dixon extrapolated from these paleontological trends to create a collection of colorful, behaviorally complex dinosaurs unlike any seen before.

Amazingly, in some respects, Dixon’s fanciful menagerie was spot on.

UD News staff remember the days when earnest teachers explained to us – as a doctrine “worthy of all men to be received,” as the Book of Common Prayer puts it – that dinosaurs died out because they were slow, and stupid, and didn’t look after their offspring, the way early mammals did. Dogmatism and continuous updating don’t sit well together.