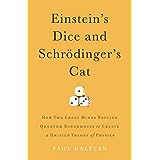 In a comparatively nonsense-free book review, we read,

Schrödinger and Einstein both spent far longer on the hunt for a unification of quantum physics and relativity than they had on the breakthroughs for which they are known. This quixotic quest forms the major part of Halpern’s book, and it makes for a tragic tale.

instein revised and rejigged his work, to the increasing ennui of his peers and the increasing adulation of the world. Schrödinger, never as famous, overstepped the mark, trying so hard to be taken seriously that he offended Einstein with public pronouncements about the superiority of his own work. For three years, Einstein didn’t return Schrödinger’s letters.

Their fellow physicists became more bewildered and irritated by the pair. It is tough for physicists to see the public offer awe and respect for ideas that are unproven speculation. …

Tough for some physicists, but for others  the multiverse sure fixed that.

See also: How and why the multiverse made unproved speculation okay.

4 Replies to “A startling claim in New Scientist”