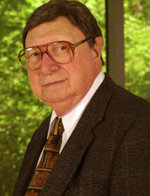 A longtime consultant to NASA and a member of the scientific advisory committee for Biosphere 2 (the largest-ever enclosed ecosystem), Morowitz was a strong advocate for a theory of emergence of life from chemical and physical principles. In the 1983 McLean v. Arkansas case over teaching creationism in schools, he provided an expert opinion, testifying in front of the court that the creationist view of life’s origins has no basis in science. More.

Once, when he received a birthday card that assessed a human body’s raw materials at only 97 cents, he recalculated the cost based on synthesized ingredients from a biochemical company catalog and re-evaluated his worth at more than $6 million.

“Information is much more expensive than matter,” he wrote in 1976. “We are led cent by dollar from a lowly pile of common materials to a grand philosophical conclusion, the infinite preciousness of every person.”

He seems not to have grasped that “infinite preciousness” is not compatible with emerged from inanimate nature alone.

And Can all the numbers for life’s origin just happen to fall into place?