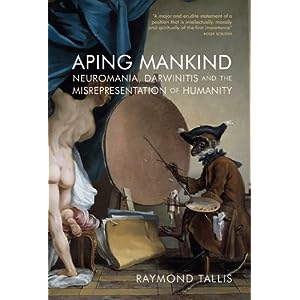 This Spiked interview by Tim Black with Raymond Tallis might be useful reading:

This sense that our minds are not what we thought they were, that it’s our brains, and the natural-physical causal network of which they are part, that is really calling the shots has been lovingly embraced by politicos on both sides of the Atlantic. It’s a development that worries Tallis: ‘That’s when [neuromania] gets dangerous rather than merely irritating – when people start invoking brain science as a guide to social policy, as a guide to understanding criminal behaviour and so on. You’re then in the same territory as Cesare Lombroso [a nineteenth-century criminologist who believed criminality was physically inherited] and other characters who have since been appropriately discredited… The person I’ve crossed swords with in the most gentle way is Matthew Taylor at the Royal Society for the Arts [formerly a New Labour adviser]. He genuinely believes that brain science will help spawn good social policy – policies that go with the grain of what neuroscience tells us about our brains, our minds and therefore ourselves and therefore society.’

It’s not just an old New Labourite like Taylor who has fallen for the specious explanatory promise of brain science. One of the first things Tory David Cameron did as UK prime minister was to establish the Behavioural Insight Unit, a strategy team dedicated to coming up with policy based on neuro-evolutionary thought. Over in the US, President Barack Obama was quick to do something similar, appointing Nudge co-author Cass Sunstein as his ‘regulation czar’. As Time magazine reported, ‘Relying on behavioural science, [Obama’s] administration is using it to try to transform the country’. Tallis’s observation in Aping Mankind resonates: ‘We are truly in a neo-phrenological era.’

Want to give odds on the chances for civil liberties in such an era?

2 Replies to “Did you know how involved government now is in materialist neuroscience, to control citizens?”