In “The challenge of the great cosmic unknowns” ( New Scientist 24 January 2011), 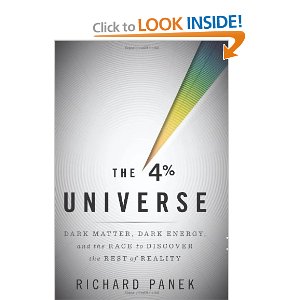 Dan Falk reviews Richard Panek’s The 4% Universe: Dark matter, dark energy, and the race to discover the rest of reality:

As he nears the present day, Panek weaves together two separate yet closely related storylines. In the first, he takes us to sophisticated laboratories around the world where researchers are trying to isolate particles of dark matter. Their best guess is that dark matter is made of WIMPs (weakly interacting massive particles), which were created at the time of the big bang and are now fiendishly difficult to detect.


In the second storyline, we join the hunt for dark energy, which began in the late 1990s when two teams of researchers studying distant supernova explosions reached a stunning conclusion: that the expansion of the universe is not slowing down, but speeding up.

The Amazon site features an interview with Panek:

Q: Sounds like science is a pretty straightforward process of discovery and follow-up.

Panek: Straightforward, maybe. Pretty, no. As I show in The Four Percent Universe, the discoveries involved a lot of behind-the-scenes rivalries that sometimes turned ugly—rivalries that continue to this day. But in a way, these rivalries have been good for the science. When scientists who would like nothing more than to prove one another wrong wind up agreeing on a weird result, their peers can’t help but take the result seriously. Astronomers hate to say it—they’re as superstitious as anyone else, and they think they’ll jinx their chances—but there are Nobel Prizes at stake here.

Q: So this is real. Astronomers actually believe that 96 percent of the universe is “missing”?

Panek: Yes. They call it the ultimate Copernican revolution. Not only are we not at the center of the universe, we’re not even made of the same stuff as the vast majority of the universe.

4 Replies to “The 4% solution: The ultimate Copernican revolution is “We’re different”?”