In Science , we read: 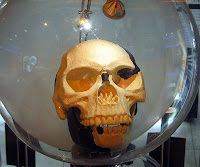 Specialists and collectors around the world have long decried the flood of sham fossils pouring out of China. But Science has learned that many composites and fakes are now finding their way into Chinese museums, especially local museums. One paleontologist estimates that more than 80% of marine reptile specimens now on display in Chinese museums have been “altered or artificially combined to varying degrees.” One consequence of the fakery is an erosion of trust in museums, which are supposed to enlighten—not con—the public. Scholars, too, pay a price: They waste time sifting authentic specimens from counterfeit chaff. And a genuine blockbuster fossil can be destroyed by attempts to enhance its appeal. (Caution: Subscriber wall)

Besides which, the past can be faked to support whatever thesis an establishment likes …

And an erosion of trust in museums may be long overdue. As Michael Ruse has noted*,

Evolution after Darwin had set itself up to be something more than science. It was a popular science, the science of the marketplace and the museum, and it was a religion—whether this be purely secular or blended in with a form of liberal Christianity.

*For an informative account of the role of museums in the spread of evolution as
a religion, see Michael Ruse, The Evolution Wars: A Guide to the Debates (Santa Barbara,
CA: ABC-CLIO, 2000), pp. 103–05. For his own ambivalent view, see pp. 113–14.

Specific examples of fraudulent artifacts of Darwin piety enshrined in museums are welcome in the Combox below.