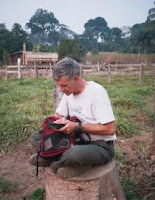 My friend Forrest Mims, called by Discover Magazine one of the 50 best brains in science, has – predictably – been attacked by mediocrities at the mag’s blog, due to his interest in intelligent design, and he has responded:

Returning to Mike’s concern that I advocate Intelligent Design, it is rather ironic that my first visit to Hawaii when the satellite drift was independently confirmed by I83 was to give a keynote talk at a scientific meeting about how I lost “The Amateur Scientist” column at Scientific American when the editor learned I rejected Darwinian macroevolution and abortion. That talk resulted in an annual teaching assignment in Hawaii that has allowed me to continue annual calibrations at the Mauna Loa Observatory since 1992 and to write a 270,000-word book on the amazing history of this world famous atmospheric research station. (The book will be published late in 2009 or in 2010.)
Mike and others who are troubled by Intelligent Design advocates who do serious science and publish in leading scholarly journals (please see my web sites for a list of my publications) need not be so worried, for part of the foundation of modern science was laid by men and women who believed in a designer God.

For their own part, the editors have decided to stand by Forrest, noting

In our feature, we recognized Mims specifically for his contributions as an amateur scientist, and we stand by that assessment. His work on the Altair 8800 computer, on RadioShack’s home electronics kit, and on The Citizen Scientist newsletter has been undeniably influential. DISCOVER does not in any way endorse the Discovery Institute’s views on “intelligent design.” At the same time, Mims’s association with that group does not invalidate his role as a leading figure in the American amateur science community, any more than James Watson’s dubious speculations about race take away from his groundbreaking research on DNA.

Watson’s speculations about race are certainly distressing and uncalled for, but Discover’s editors are wise to spare themselves much grief by taking the firm stand that they have. Science motors along on facts, so political correctness is not one of the branches of science.

As a scholar pointed out to me years, ago, political correctness is typically the refuge of third- and fourth-rate academics. It can reduce a discipline that was once a source of knowledge and understanding of our world to dense, frightened babble. The further the mag stays away from it, the better.

Mims, probably best known for his electronics work, is also a keen environmentalist and supporter of amateur science as a support to professional science. Forrest also offered a link to this video account of the “Scientific American” affair (in which he was refused a column years ago – though that seems to have been patched up, as he has written for them since).

Note: On the subject of racism, Forrest asked me a while back, how come the Out of Africa ape people are always portrayed as black? Interesting question because, in general, in my childhood, the “cave man” of “educational” art was a beefy Caucasian. He was the sort of fellow who thought that he might gain courage by eating his enemy’s heart. Simple, sure, but definitely not an ape. Some cultural history there, I guess …