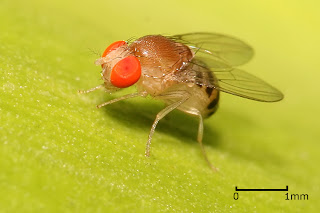 Evolutionary biologists have long proposed that the genes most important to life are ancient and conserved, handed down from species to species as the “bread and butter” of biology. New genes that arise as species split off from their ancestors were thought to serve less critical roles — the “vinegar” that adds flavor to the core genes.

But when nearly 200 new genes in the fruit fly species Drosophila melanogaster were individually silenced in laboratory experiments at the University of Chicago, more than 30 percent of the knockdowns were found to kill the fly. The study, published December 17 in Science, suggests that new genes are equally important for the successful development and survival of an organism as older genes. (Dec. 16, 2010)

This snippet underlines a key problem with Darwinism: When Darwinists make predictions that don’t pan out, their theory is by no means considered a less certain central dogma; rather, it elasticizes and expands to retrodict what happened. Each instance creates information loss for the theory.

Thus, the Darwinist can tell the public, in apparent good faith, that “overwhelming evidence” supports the theory. By “evidence” is meant only the decades-long series of special pleadings and patches, and occasional purgings of dissent.

Fruit fly: The fruit fly image was taken by Muhammad Mahdi Karim in Dar es Salaam and is offered here under the Gnu Free Documentation License.

7 Replies to “From Science Daily: New genes as essential as old ones”