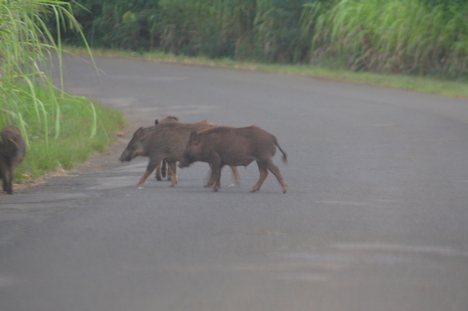 … the behaviour could have evolved in pigs’ most ancient relatives.”We all evolved from fish, so it could be that this motivation to be in water could be something that was preserved in animals that are able to do so.”

For many animals, this would be too dangerous, because watering holes are ideal places for predators to ambush their prey.

“But pigs, like many carnivores, are relatively large animals with enlarged canine teeth, so they would be better able to fend off an attack.”
So rather than pigs needing to cool down in mud because they do not have [functional] sweat glands, Dr Bracke thinks that they “did not evolve functional sweat glands like other ungulates because they liked wallowing so much”.

He points out that pigs are related to whales and hippos and that the behavior is probably a “hardwired” preference for shallow water that” could have been a turning point in the evolution of whales from land-dwelling mammals.”

However, some think pigs evolved to love snow:

A herd of 25 to 30 feral pigs is tearing up backyards and scaring locals and tourists near Christina Lake in B.C.”Nothing about them is very pleasant. There are emails going back and forth from people who are concerned that they could get confrontational and aggressive,” said Grace McGregor, regional district director for the area, which is north of Grand Forks on Highway 3.

“I’m very, very concerned about people out walking and hiking. I certainly don’t want anything happening to anyone.”

The pigs are believed to have escaped from a farm in the area a few years ago.

Some are struck by how swiftly and successfully  the highly bred domestic pigs reverted to an apparent feral condition.

7 Replies to “Saturday afternoon science show: Pigs love mud because we all evolved from fish”