Devolution means that a life form jettisons valuable qualities just to survive, often by becoming  parasite or “freeloader” (see below). 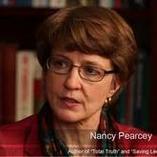 From Nancy Pearcey at CNS:

King’s vision of equal rights is no longer “self-evident” to many of America’s opinion makers in media, politics, and academia. Why not? Because they have embraced secular ideologies that sabotage King’s ideal.

Listen in on some of the thinkers who are busy destroying King’s vision of inalienable rights.

In a UNESCO lecture, the atheist philosopher Richard Rorty observed that throughout history, societies have excluded certain groups from the human family—those belonging to a different tribe, class, race, or religion. Historically, Rorty noted, it was Christianity that gave rise to the concept of universal rights, derived from the principle “that all human beings are created in the image of God.”

However, Rorty went on, because of Darwin’s theory of evolution, many people no longer affirm the idea of creation. Therefore, he argued, they no longer have a basis for maintaining that everyone who is biologically human is also part of the “moral community” (people toward whom we bear a moral responsibility).

Ironically, Rorty admitted that he himself had to borrow the concept of human rights from Christianity. In fact, he dubbed himself a “freeloading atheist.”

Historian Yuval Harrari elaborates in greater detail on why secularism undercuts King’s concept of universal rights. In his international bestseller “Sapiens: A Brief History of Humankind,” Harrari says if life evolved by material processes, we must dismiss the Declaration of Independence with its concept of “unalienable rights … endowed by [the] Creator.” More.

It’s actually worse than that. Darwinism can only succeed by making war on the intellectual life as well as on ethics. And the Darwinians are going at it hammer and tongs.  Destruction of the intellectual life is fine with them as long as they come out on top. Which is what Darwinism finally is, a form of devolution of humans: Winning by dispensing with being human (a costly fitness burden).

Nancy Pearcey is the author of Love Thy Body: Answering Hard Questions about Life and Sexuality.

See also: The illusion of consciousness sees through itself.

Devolution: Getting back to the simple life