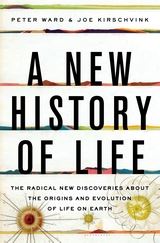 A new book from Bloomsbury,
A New History of Life: The Radical New Discoveries about the Origins and Evolution of Life on Earth , by Peter Ward and Joe Kirschvink, is blurbed as follows:

Charles Darwin’s theories, first published more than 150 years ago, still set the paradigm of how we understand the evolution of life–but scientific advances of recent decades have radically altered that understanding. In fact the currently accepted history of life on Earth is flawed and out of date. Now two pioneering scientists, one already an award-winning popular author, deliver an eye-opening narrative that synthesizes a generation’s worth of insights from new research.

Writing with zest, humor, and clarity, Ward and Kirschvink show that many of our long-held beliefs about the history of life are wrong. Three central themes emerge from the narrative. First, the development of life was not a stately, gradual process: Catastrophe, argue Ward and Kirschvink, shaped life’s history more than all other forces combined–from notorious events like the sudden extinction of dinosaurs to recently discovered ones like “Snowball Earth” and the “Great Oxygenation Event.” One startling possibility: that life arrived on Earth from Mars. Second, life consists of carbon, but three other molecules have determined how it evolved: oxygen, carbon dioxide, and hydrogen sulfide are carbon’s silent partners. Third, ever since Darwin we have thought of evolution in terms of species. Yet it is the evolution of ecosystems–from deep-ocean vents to rainforests–that has formed the living world as we know it. More. :

Did Ward, one of the authors of the Rare Earth Principle (Earth is unusually suited to life for a number of evidence-based reasons), used to talk so disrepectfully of the Sage of Down (Darwin)?

Don’t recall so, and the vid and trannies below make quite clear that staying in step with Correct thought is really important to Ward. Things are wrong in principle if they are not Correct Thought. They are allowed to be interesting if they are Correct (but only up to an approved point). So it is okay to say that the “currently accepted history of life on Earth is flawed and out of date” if Correct conclusions are drawn and no others. We will likely meet that many times again in the next few years.
.
For a classic bit of homage to the Sage of Down from someone who is actually undermining him, see: New origin theory for cells that gave rise to vertebrates

One Reply to “New book: Our long-held beliefs about the history of life are wrong?”