The NCSE is shamelessly pandering to religious interests to advance their cause, and because I really like the NCSE, I’d like to help them out in their recent campaign to support The Clergy Letter Project.

The symbol I suggest is Darwin’s walking stick. Here is what it looks like as reported by the BBC news: 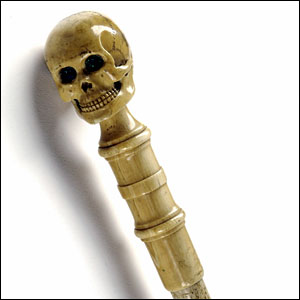 [The picture kinda reminds me of Eric “Ebola Boy” Pianka showing skulls as he publicly expressed his delight at the prospects of humanity being exterminated.]

This symbol accurately represents Darwin and his theory. Darwin hypothesized the idea that death and extinction are the mechanisms of creation. Thus, this symbol represents Darwin’s theories better than any thing I know of. As the Chinese proverb goes, “a picture is worth a thousand words”.

Just imagine instead of Christmas, churches adopt Darwin Day. In that holiday season of Evolution Sunday, instead of of handing out Christmas candy canes, they hand out candy-flavored Darwin walking sticks. Yum.

Notes:
1. To learn more about Darwin’s theory and death, please refer to this memorable essay by Bill Dembski: Darwin, Natural Selection, and the Norman Bates School of Hotel Management.

2. HT PZ Myers who alerted me to the BBC news article as he expressed great admiration for Darwin’s walking stick.

32 Replies to “Improved symbol for the Clergy Letter Project”