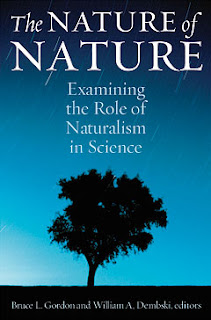 You’d better order this one for yourself. It’s the long-delayed outcome of the Nature of Nature conference, which got intelligent design theorists Bill Dembski and Bruce Gordon’s Polanyi Center at Baptist Baylor University shut down.*

It features top guns on both sides of the controversy:

Unmatched in its breadth and scope, The Nature of Nature brings together some of the most influential scientists, scholars, and public intellectuals—including three Nobel laureates—across a wide spectrum of disciplines and schools of thought.

Here they grapple with a perennial question that has been made all the more pressing by recent advances in the natural sciences: Is the fundamental explanatory principle of the universe, life, and self-conscious awareness to be found in inanimate matter or immaterial mind? The answers found in this book have profound implications for what it means to do science, what it means to be human, and what the future holds for all of us.

I wrote the index for the book, and can testify to its breadth and usefulness. Also, to its absence of conspiracy theorists in mortarboards, with nothing better to offer you than their dark mutterings. And no, I am not paid to say this.

(*The conference wasn’t the immediate cause, but was surely the key one. Lord knows, a reliable Baptist science prof can’t risk saying that the universe and life forms show evidence of design – evidence that can be debated rationally. For one thing, people might suspect that the prof believes in God in such a clear and effectual way that he cannot just take it back when the cold wind of fascism next blows his way, by muttering something about “faith” being quite different from “science.”)

21 Replies to “Book Santa will keep for himself: The Nature of Nature”