I asked young astronomer Guillermo Gonzalez how things were going, after Iowa State University rejected his tenure in a case that stank to high heaven.

While it is more difficult to find the time to do research here, I have managed to squeeze out a few papers (2 in 2010).

Remember that, folks. Trolls and their lackeys don’t run the world (yet). You can still get in some good research and avoid their odious claptrap. 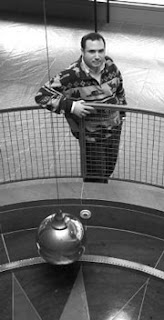 Study: Sun not special, therefore alien life should be common?

Privileged planet” astronomer Guillermo Gonzalez: Dissing St. Carl Sagan in his own church
Rehabilitating the idea of creation – Big Bang Cosmology
Podcast: Is the earth uniquely situated for scientific observation? Do we live on a privileged planet?On this
episode of ID The Future we have a short clip about the book The Privileged Planet. In the book, authors Jay
Richards and Guillermo Gonzalez suggest that earth was designed for scientific discovery. They introduce a new
idea that more than just being rare in the universe, the earth is ideally located for scientific observation.
Go here to listen.

6 Replies to “Catching up: Young astronomer who paid the price for dissing Carl Sagan settling into new observatory”