Darrell Falk, one of the key people at Francis Collins’s BioLogos Foundation, has a remarkable piece arguing that Darwinian evolution is the only way to preserve Christian orthodoxy in the face of intelligent design (go here). His line is that a micro-managing designer would be responsible for all the nasty designs we find in biology, so natural selection must have done all the creative work in producing biological complexity and diversity. I’ve seen this line increasingly taken by Christian Darwinists. Until this piece by Falk, Francisco Ayala’s DARWIN’S GIFT TO SCIENCE AND RELIGION was the most extreme form of it. But Falk has taken it to a new level:

Some of the by-products of natural selection are intricate structures that can fashion cellular machines that are able to harm us, just like the machines that we humans make. It happens in the context of freedom–God-granted freedom. However, the notion that irreducibly complex structures are built and put in place by a meticulous detail-driven intelligent designer is not consistent with Christian theology and should not have been embraced by Christians. With all due respect to my friends who hold this view, I would venture to say it borders on the heretical–certainly it is scientifically heretical, but I wonder if it is not theologically so as well. God is not the engineer that built these intricate little terror machines. And the Satan that we know from Christian theology is not a designer of life’s machinery. Those who wish to believe this are free to do so, but they have moved onto an island of scientific fantasy and perhaps even theological heterodoxy. The greatest beauty in the universe emerges through processes that arise through God-ordained freedom. Let us celebrate that beauty, even as we, in the presence of God’s Spirit, grit our teeth, and endure the hardships that come as a by-product.

For Falk and fellow Christian Darwinists ID is bad science and bad theology and Darwinian evolution is the key to reforming the faith. As an antidote to Christian Darwinism, let me suggest reading my book THE END OF CHRISTIANITY: FINDING A GOOD GOD IN AN EVIL WORLD. 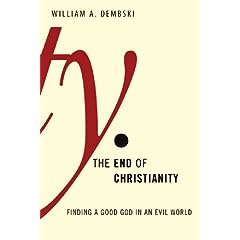 Here is a relevant passage from ch. 20 (titled “What about Evolution?” — substitute “Falk” for “Ayala” when reading it):

I want next to turn to the charge made by some theistic evolutionists that Christian theism requires God to create indirectly by evolution rather than directly by intervention (as in special creation). Theistic evolutionists worry that a God who creates by direct intervention renders the problem of evil insoluble. Such a God would be responsible for all the botched and malevolent designs we find in nature. By letting Darwinian natural selection serve as a designer substitute, theistic evolutionists can refer all those botched and malevolent designs to evolution. This, in their view, is supposed to resolve the problem of natural evil and thereby help validate Christian theism.

Well-known evolutionist and former Catholic priest Francisco Ayala makes precisely such an argument: “A major burden was removed from the shoulders of believers when convincing evidence was advanced that the design of organisms need not be attributed to the immediate agency of the Creator, but rather is an outcome of natural processes.” According to Ayala, “if we claim that organisms and their parts have been specifically designed by God, we have to account for the incompetent design of the human jaw, the narrowness of the birth canal, and our poorly designed backbone, less than fittingly suited for walking upright.”

In Ayala’s view, right-thinking Christians need to “acknowledge Darwin’s revolution and accept natural selection as the process that accounts for the design of organisms, as well as for the dysfunctions, oddities, cruelties, and sadism that pervade the world of life. Attributing these to specific agency by the Creator amounts to blasphemy.” Charging Christian opponents of evolution with blasphemy may seem unduly harsh. Ayala therefore attempts to soften this charge by granting that those who oppose evolution and support special creation “are surely well-meaning people who do not intend such blasphemy.” Ayala’s concession (and condescension) here is to the intellectual feebleness, as he sees it, of those who cling to the old naive creationist outlook and have yet to wrap their minds around the stark truth of evolution. In any case, he doesn’t retract the charge of blasphemy: “this is how matters appear to a biologist concerned that God not be slandered with the imputation of incompetent design.”

In turning the table on special creation, Ayala has in fact turned it 360 degrees. The table is therefore back to where it was before, and the problem he meant to shift to special creation confronts him still. Ayala worries that a God who creates by direct intervention must be held accountable for all the bad designs in the world. Ayala’s proposed solution is therefore to have God set up a world in which evolution (by natural selection) brings about bad designs. But how does this address the underlying difficulty, which is that a creator God has set up the conditions under which bad designs emerge? In the one case, God acts directly; in the other, indirectly. But a creator God, as the source of all being, is as responsible in the one case as in the other.

We never accept such shifting of responsibility in any other important matter, so why here? What difference does it make if a mugger brutalizes someone with his own hands (i.e., uses direct means) or employs a vicious dog on a leash (i.e., uses indirect means) to do the same? The mugger is equally responsible in both cases. The same holds for a creator God who creates directly by intervening or indirectly by evolution. Creation entails responsibility. The buck always stops with the Creator. That’s why so much of contemporary theology has a problem not just with God intervening in nature but also with the traditional doctrine of creation ex nihilo, which makes God the source of nature.

The rage in theology these days is to diminish the power and ultimacy of God so that God is fundamentally constrained by the world and thus cannot be held responsible for the world’s evil (recall chapter 3). Process theology, which sees God as evolving with the world and the world as having an autonomy beyond God’s reach (thereby enabling God to shed responsibility for evil), is a case in point. As process theologian Robert Mesle elaborates, “[S]ince God cannot control the evolutionary process, there is no reason even to assume that God was aiming that process specifically at us. The history of evolution has been filled with more crucial events than we can dream of, and God could not control them. God and the world have been involved in a continuous dance in which God must continually take the decisions of the creatures and work with them—whatever they may be. For better or worse, each decision of each creature plays some role in the world’s process of becoming. And God works to create something good out of what the world makes possible. Evolution, then, is an ongoing adventure for God, as it is for the world.”

In my view, process theology unleashes a raging pack of new problems and thus is not a suitable replacement for the traditional doctrines of God and creation. But let’s grant, for the sake of argument, that it resolves the problem of dysteleology (bad designs) resulting from natural selection. The problem is that Ayala and fellow theistic evolutionists are not arguing for process theology (or some other diminished deity) but for the compatibility of evolution with classical Christian theism. We are told, “Embrace evolution and you can still be a good Christian.”

Ayala is therefore in no position to require that Christian believers revise their doctrine of God in light of evolution. In particular, he cannot require that believers in divine omnipotence and creation ex nihilo revise these beliefs to suit a more evolution-friendly theology. Christians who hold to a traditional doctrine of creation and accept natural selection as God’s method of creating organisms therefore confront the problem of evil with the same force as believers who hold the identical doctrine of God but reject natural selection and accept special creation. Indeed, for the Christian it does nothing to resolve the problem of evil by passing the buck to a naturalistic evolutionary process (a process, in that case, created by God). A theodicy that passes the buck in this way is inadequate and simplistic. It fills one hole by digging another.