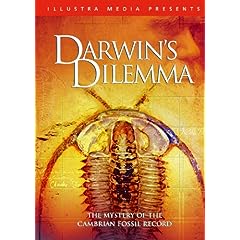 Product Description
Darwin’s Dilemma examines what many consider to be the most powerful refutation of Darwinian evolution – the Cambrian fossil record. Charles Darwin realized that the fossil evidence did not support his theory of gradual, step-by-step evolutionary development. He hoped that future generations of scientists would make the discoveries necessary to validate his ideas. Today, after more than 150 years of exploration fossil evidence of slow, incremental biological change has yet to be excavated. Instead, we find a picture of the rapid appearance of fully developed, complex organisms during the outset of the Cambrian geological era. Organisms that embody the major animal body plans that exist today. This remarkable explosion of life is truly Darwin’s Dilemma and is best explained by the existence of a transcendent intelligence.

Another great video by Illustra Media!