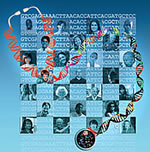 Remember when, as sociologist Dorothy Nelkin tells it,

The language used by geneticists to describe the genes is permeated with biblical imagery. Geneticists call the genome the “Bible,” the “Book of Man”and the “Holy Grail.” They convey an image of this molecular structure as more than a powerful biological entity: it is also a mystical force that defines the natural and moral order. And they project an idea of genetic essentialism, suggesting that by deciphering and decoding the molecular text they will be able to reconstruct the essence of human beings, unlock the key to human nature. As geneticist Walter Gilbert put it, understanding our genetic composition is the ultimate answer to the commandment “know thyself.” Gilbert introduces his lectures on gene sequencing by pulling a compact disk from his pocket and announcing to his audience, “This is you.”*

At ScienceDaily (Jan. 14, 2011), we learn that after the complete draft of the human genome was released in 2003, of the growing focus on is on the epigenome:

From the genome, we learned? …

“We learned many things from the Human Genome Project,” Elgin says, “but of course it didn’t answer every question we had!

“Including one of the oldest: We all start life as a single cell. That cell divides into many cells, each of which carries the same DNA. So why are we poor, bare, forked creatures, as Shakespeare put it, instead of ever-expanding balls of identical cells?

“This [epigenome] work,” says Elgin, “will help us learn the answer to this question and to many others. It will help us to put meat on the bones of the DNA sequences.”

You, know, it almost makes one go all religious and say: Re the “Bible,” the “Book of Man”and the “Holy Grail,” worship the creator not the creation. And recycle your CDs.

23 Replies to “Epigenome: Better find a new use for that pocket CD of your genome”