In case we haven’t mentioned it previously at UD, I thought today would be a good day to remember Robert Jastrow, one of the stars of the pro-ID movie Privileged Planet.

Jastrow passed away February 8, 2008, a little more than two years ago today. He was the founding director of NASA’s Goddard Institute for Space Studies and author of the celebrated ID-sympathetic book: God and the Astronomers (available at www.ARN.org). 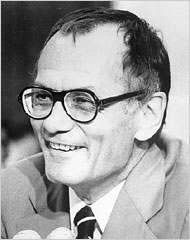 Now we see how the astronomical evidence leads to a biblical view of the origin of the world…
The details differ, but the essential elements in the astronomical and biblical accounts in Genesis are the same: the chain of events leading up to man commenced suddenly and sharply at a definite moment in time, in a flash of light and energy.

Robert Jastrow
God and the Astronomers

Here is the tribute written in the NY Times:

Robert Jastrow, Who Made Space Understandable, Dies at 82

By JOHN SCHWARTZ
Published: February 12, 2008
Robert Jastrow, who led a major space science institution and helped to bring space down to earth for millions of Americans, died Friday at his home in Arlington, Va. He was 82.

In an age when scientists tended to keep to their laboratories and lecture halls, Dr. Jastrow was a very public figure, a prolific author and commentator on a wide range of topics including the space program, astronomy, earth science and national security issues. He lectured on CBS and NBC about space, and his 1967 book “Red Giants and White Dwarfs” was a best seller for a nation hungering for an accessible guide to science during the space race.

“He had a deep sense of the need to interpret science and make it available to the public,” said Albert Arking, a former student of Dr. Jastrow. As an ambassador of science, he was a natural, Dr. Arking recalled, saying, “His enthusiasm for science was infectious.”

His descriptions were sharp and his language clear. In an article he wrote in August 1969 while he was director of the Goddard Institute, he described the 50 pounds of rocks and soil that the Apollo 11 astronauts brought back to earth as a “Rosetta Stone” of the history of the solar system. Without the erosive properties of air and water that have turned the surface of the earth into a kind of palimpsest, an over-written document that hides all but glimpses of its history, the surface of the moon, he said, “has preserved the record of its past for an exceptionally long time.”

Dr. Jastrow was born in 1925 in New York, and earned undergraduate and doctoral degrees in physics at Columbia University. In 1958, he joined the newly formed National Aeronautics and Space Administration as head of its theoretical division, which did basic research in fields like cosmology and astronomy.

With the encouragement of Harold Urey, a Nobel laureate at NASA at the time, Dr. Jastrow became an energetic proponent of lunar exploration. In 1961, he became director of the Goddard Institute for Space Studies, which worked within the agency on projects like the robotic probes Pioneer, Voyager and Galileo, which sailed throughout the solar system.

He received the NASA Medal for Exceptional Scientific Achievement and the Arthur S. Flemming Award for Outstanding Service to the United States Government, as well as the Columbia University Medal of Excellence.

He was briefly married in 1967 to the former Ruth Witenberg. He leaves no immediate survivors, the Marshall Institute said.

A competitive athlete who was “a bit reckless” as a skier, Dr. Arking said, Dr. Jastrow was driven to work as hard as he played, often working all night to finish projects and expecting his staff to do the same. He would often pull his colleagues out of the office to run with him around the Central Park Reservoir.

Later in life, as chairman of the Marshall Center, Dr. Jastrow blended the scientific with the political, often, colleagues said, in response to what he saw as efforts by others to politicize science. In 1985, he published “How to Make Nuclear Weapons Obsolete,” a book supporting President Ronald Reagan’s Strategic Defense Initiative, known as the Star Wars missile defense system.

Dr. Jastrow also became a prominent skeptic on climate change issues, arguing that scientists who warned of a global warming crisis were misattributing nature’s effects on climate to the effects of mankind. Dr. Arking, a climate scientist at John Hopkins University who continued to visit his old mentor on a regular basis until two days before his death, recalled arguing the issue with Dr. Jastrow, finding him less and less willing to make any concessions in their discussions.

“I tried to dissuade him on some issues,” Dr. Arking said, recalling that Dr. Jastrow responded: “Yeah, you’re probably right, but this is the way we have to put it. We have to convince people that this is not the catastrophe that people were making it out to be.”

Here is a Clip of Jastrow in Privileged Planet

3 Replies to “In Remembrance of Privileged Planet Star Robert Jastrow”