This is a phrase a software engineer will use to jokingly confess his software has a defect.

When Sharon Moalem wrote the NY Times Bestseller, Survival of the Sickest: Why We Need Disease, he probably did not intend to make a joking confession of flaws in Darwin’s theory, but he succeed in doing so. 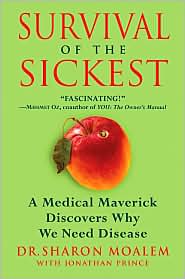 Recall the words of Darwin:

Natural Selection is daily and hourly scrutinising, throughout the world, the slightest variations; rejecting those that are bad, preserving and adding up all that are good.

If Darwin’s claim is true, why then are we confronted with numerous, persistent, hereditary diseases?

Can it be that Darwin was wrong? The obvious answer is yes. But in the face of an obvious flaw in Darwin’s ideas, Moalem argues that what appears to be a flaw in Darwin’s theory is actually an ingenious feature! Moalem extols the virtues of disease, and since disease is virtuous, natural selection will favor it.

It is accepted that sickle-cell anemia persists because of natural selection, but what about other diseases? Moalem explores many other diseases like diabetes, hemochromatosis, high cholesterol, early aging, favism, obesity, PANDAS, CCR5-delta32, xenophobia, etc. showing how natural selection incorporated these “virtuous” diseases into our species.

397 Replies to “Survival of the Sickest, Why We Need Disease”