This book is based on THE NATURE OF NATURE conference that Bruce Gordon and I put together at Baylor back in 2000 (for the conference and the Polanyi Center that hosted it, go here). The book is now listed at Amazon. Note that it will be out February 2010 (not 2009 as listed) and will be over 1,000 pages (not 900 as listed). 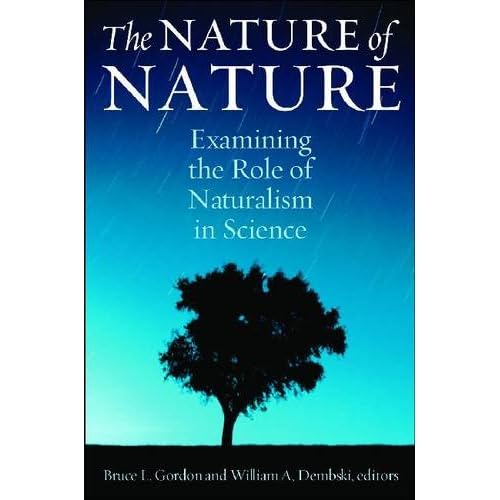 The world’s leading authorities in the sciences and humanities—dozens of top scholars, including three Nobel laureates—join a cultural and intellectual battle that leaves no human life untouched. Is the universe self-existent, self-sufficient, and self-organizing, or is it grounded instead in a reality that transcends space, time, matter, and energy?

The cultural battles now raging between conservatives and secular progressives has extended even into the scientific disciplines. And this stunning new volume captures the titanic clash of worldviews among those who have thought most deeply about the nature of science and of the universe itself.

Unmatched in its breadth and scope, The Nature of Nature brings together some of the most influential scientists, scholars, and public intellectuals—including three Nobel laureates—across a wide spectrum of disciplines and schools of thought. Here they grapple with a perennial question that has been made all the more pressing by recent advances in the natural sciences:Is the fundamental explanatory principle of the universe, life, and self-conscious awareness to be found in inanimate matter or immaterial mind?The answers found in this book have profound implications for what it means to do science, what it means to be human, and what the future holds for all of us.

29 Replies to “THE NATURE OF NATURE, edited by Bruce Gordon and William Dembski”