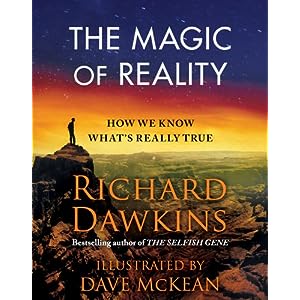 Or is there some down time?

The Brit elite seem to be falling all over themselves to praise Dawkins’s latest, for children, The Magic of Reality. From the Times Leading Article – the Times (01 September 2011):

The cruellest and most unreasonable charge levelled against evolution is that it posits a world without wonder. The creationist, the thinking goes, has design, holy purpose and ineffable mystery. His opponent, by contrast, has only a cold puddle of mud, sparked into action by accident and chemistry. Yet as any child could tell you, the charge is baseless. For the latter to have given rise, over millennia, to the tooth, the eye, the human race, the art of music, the aeroplane, the plot of Harry Potter — is that not cause for wonder enough?

It’s also cause for disbelief, if evidence for undirected creation is lacking.

But children, perhaps, see these things more clearly. In Eureka today, Richard Dawkins — possibly the most fervent evolutionist alive today — brings us extracts from his new book for children on science, The Magic of Reality. In his preamble, he notes that evolution should be a fairly simple thing to grasp, and yet many intelligent adults seem to struggle with it. Could it be, he suggests, that we become “weighted down by misleading familiarity?” He blames the philosophy of essentialism, that of Aristotle and Plato, which asserts that categories are distinct, with clear demarcation between them. The great magic of evolution, he notes, is the manner in which one thing, so very slowly, can become another. Given time, a cell can become an eye, or an elephant, or a man.

Here at Uncommon Descent, we’ve been dealing with a Darwinist who genuinely believes that, on the subject of carnivorous plants, stuff just happens, and inconvenient facts can be ignored, as long as he is defending Darwin.

Yes. It’s all well suited to children, if you want your kids to grow up believing unsupportable beliefs.

At least, now we now understand the Brit riots better: Everything comes from nothing. Desire equals talent. Destruction equals creation. Anger equals rights. Believe it if you want.

4 Replies to “The London Times on Dawkins: Darwinism is magic, and children know it! Do the riots follow automatically?”