Karsten Pultz’s is the author of Exit Evolution.

Some flagellum motors (FM) rotate up to 100.000 RPM (revolutions per minute). For a motor to reach such a speed it needs precision engineered parts like the axle, rotor and bushings. Although being a bio-machine,
the FM has to live up to the same high standards as manmade motors because both operate under the same laws of nature.

To give an example: For a motor to reach 100.000 RPM it must be in perfect balance. Individual parts must be manufactured within precise tolerances keeping dimensional accuracy at its highest. Any imbalance will cause vibrations which will put a limit to the rotation speed, lower efficiency, and potentially be outright destructive. Research has revealed the FM to be an absolute marvel when it comes to energy efficiency.

This confirms a high standard of engineering where tolerances are kept strict.

You know it from when you get new tyres on the car. The tyre guy mounts small pieces of metal on the rim in order to bring balance to a not perfectly manufactured tyre. Unbalanced tyres will cause nauseating vibrations and could in extreme cases even cause danger at high speed. Although being about 45 nanometers the flagellum motor still operates under the same laws of nature as the tyre, and at 100.000 RPM, it would vibrate itself to pieces if it weren’t 100 % balanced.

Comparing the FM to the electric motor: 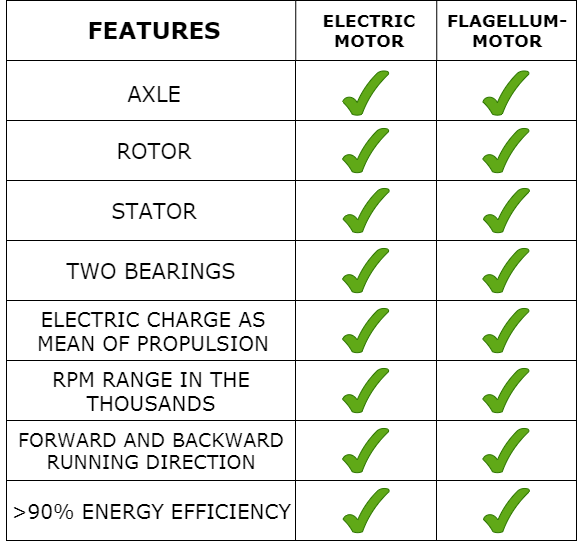 You would think it reasonable, not the least within science, to expect similar effects to have similar causes. The electric motor and the FM are so similar in construction and function, that it is unreasonable and unscientific to rule out the obvious possibility that they share the same causality. 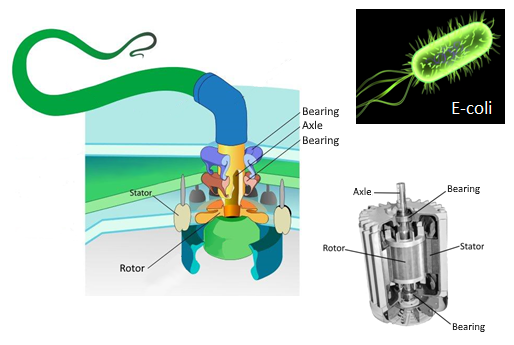 We always try to avoid the occurrence of random changes in machinery because they produce havoc. In the imaginary world of evolution though, this rule is suspended, and not only suspended but reversed as it is claimed that random changes in fact constitutes the innovative force causing evolution to progress.

In the real world causes and effects regarding complex functional systems like for instance electric motors look like this:

In the evolutionary narrative cause and effect look like this:

We find no empirical evidence to support those evolutionary claims that happens to completely contradict these two lines of evidence. We do not even find phenomena that could justify questioning this common sense knowledge.

Insisting on finding an evolutionary explanation for the flagellum motor is the same as trying to find an unnecessary, less probable, and more complicated causality hence violating the principle of Ockham’s razor. If your car keys are gone you don’t start an investigation by first assuming the most unlikely hypothesis like leprechauns or fairies might have taken your keys. No, you start an investigation by assuming the most likely and logical, like maybe your wife took the keys. If this principle were applied to the investigation into the origin of the flagellum motor, you would start with presuming design.

19 Replies to “Why a mechanic infers design. Karsten Pultz explains”