Yeah, only in Dawkins’ dreams.

Look at the right atrium in these four creatures from Encyclopedia Britannica:

How did that right atrium evolve from one side to the other along with changes in its connection to the pulmonary artery? In the crocodile and snake the right atrium is on the right ventricle but in the lizard and turtle they are on the left ventricle.

Look at the aortas. In the lizard they are all on left ventricle, in the snake on the right ventricle, and then split for the turtles and crocodiles. How did those aortas migrate from on ventricle to the other without the transitionals being lethal?

Study the picture more and you’ll see, the Intelligent Designer seems almost to have a sense of humor in exploring the various implementations.

Darwinists will say, “we have sequence comparisons that demonstrate the similarity, therefore the transitionals had to exist”, but someone with an engineering mind would say, “so what did the transitionals look like without killing the organism?”

On could say, “Sal you have it all wrong, they all evolved from the 2-chambered heart”. 😯 Well that only makes the problem worse, not better! The above hearts are not 2-chambered. See below to understand the difficulty. But first, I note, I’m not the first to raise the issue. One brave ID student challenged his biology teacher as recounted by this atheist student:

There’s a fellow in my class who is quite religious, we both enjoy a good discussion about life. He is a Christian (who believes VERY strongly in intelligent design) while i am a Atheist.

One topic came up in class about how the heart could have evolved from 2 chambers to 3 (and i suppose a 4 chamber heart), our science teacher couldn’t answer the question to which he replied “Than why teach it?” (He often says that, gets on my nerves a bit, but I’d rather let it be).

After class i came up to him and told him I’d have a answer for him, time went on and i forgot about it, but I’d love to answer the question for him. I couldn’t seem to find anything about it in wikipedia or google, so i figure maybe a message board dedicated to science may have the answer.

Here is the difficulty. The wiring from 2-chambered (fish) to 3-chambered (some reptiles) is pretty difficult. It can’t happen in gradual steps. Not only does the 3rd chamber have to come into existence, there has to be a major simultaneous plumbing overhaul. After that, then you have to account for the different plumbing above for the non-2-chambered hearts. The transitionals would be lethal in each step. 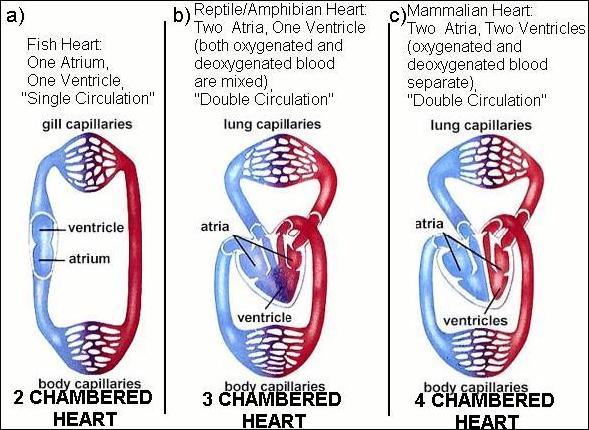 No wonder the biology teacher could not describe the transitional!

2. Apparently 3-chambered hearts are often viewed as having one ventricle, but the Encyclopedia Britanica describes the single ventricle as being 2 (one right and one left), but it doesn’t matter that much when considering the position of the right atrium and other plumbing.

78 Replies to “Is there a transitional in princple for these hearts?”