A friend draws our attention to Anthony O’Hear:

Director of the Royal Institute of Philosophy, editor of the journal Philosophy, author of many books on the subject, and was formerly Government Advisor on Education and Teacher Training. He is a philosopher with a special interest in education.

Friend offers some notes to the vid lecture (Fall, 2015) below:

1. Darwin’s notion of progress
2. His stance on the creator
3. Knowledge of reality — i.e., Darwinism undermines its own claims to
truth for if everything is “explained” by natural selection, how do we get
to truth?
4. Darwin on human development (primitive/savage peoples)
5. Darwinism and social policy

1. Natural selection gives no warrant for any progressivism regarding evolution; 2. It makes it hard to see what faith we should have in our scientific and philosophical speculations (and many other human activities); 3.It gives no warrant for associating success in evolutionary terms with any greater degree of civilization or morality; 4. At the same time the theory of natural selection seems to sanction the type of society that would run counter to many commonly held human virtues and decencies. 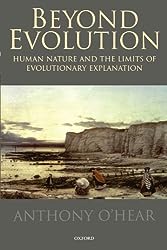 He has a book, Beyond Evolution: Human Nature and the Limits of Evolutionary Explanation (1997), Here is a brief abstract.

In this controversial new book O’Hear takes a stand against the fashion for explaining human behavior in terms of evolution. He contends that while the theory of evolution is successful in explaining the development of the natural world in general, it is of limited value when applied to the human world. Because of our reflectiveness and our rationality we take on goals and ideals which cannot be justified in terms of survival-promotion or reproductive advantage. O’Hear examines the nature of human self-consciousness, and argues that evolutionary theory cannot give a satisfactory account of such distinctive facets of human life as the quest for knowledge, moral sense, and the appreciation of beauty; in these we transcend our biological origins. It is our rationality that allows each of us to go beyond not only our biological but also our cultural inheritance: as the author says in the Preface, “we are prisoners neither of our genes nor of the ideas we encounter as we each make our personal and individual way through life.”.

Note: Some of us would add that conventional Darwinism is now well beyond parody: As in evolutionary psychology (we rest our case).

See also: Talk to the fossils: Let’s see what they say back

Fossils and friends: convergence on a common goal, horizontal gene transfer, epigenetics, devolution, self-organization, genome doubling, hybridization, jumping genes, symbiosis … we would have said Darwin if we had meant Darwin! Coach, can’t you just get yourself an applause machine that shouts “Darwin” instead?

One Reply to “Vid: Distinguished philosopher on Darwinism undermining itself”