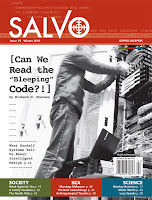 When Britain’s Guardian newspaper first introduced its “evolutionary” agony aunt (advice columnist in America) in 2009—to honor 150 years of the culture birthed with Charles Darwin’s 1859 book, On the Origin of Species—I thought, “Aha! a send-up, to be sure.” I was wrong, but in fairness, when the evolutionary psychologist speaks, even an expert can’t always tell.

No spoof. The Guardian burbled proudly about Carole Jahme, author of Beauty and the Beasts: Woman, Ape and Evolution and winner of the Wellcome Trust Award for Communication of Science to the Public. For the 2009 Darwin bicentennial celebrations, Jahme, who holds an M.A. in evolutionary psychology, put together a comedy show titled Carole Jahme is Sexually Selected, which was described as a combination of Charles Darwin and Charlie Chaplin.

The Guardian touts her column as “shin[ing] the cold light of evolutionary psychology” on readers’ problems, thus apparently offering welcome relief from the “Aw, just dump the dweeb!” froth churned out by glossier rags and mags.

And treat yourself or a friend to a year-long Salvo of light-hearted fun at the expense of publicly venerated nonsense.