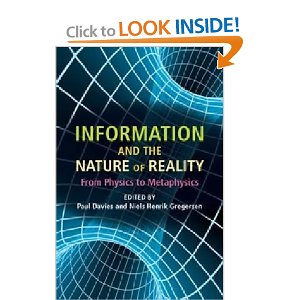 Computational physicist Vlatko Vedral reviews Paul Davies and Niels Henrik Gregersen’s new collection of essays at physicsworld.com in “An inordinate fondness for bits” (Jan 11, 2011). In Information and the Nature of Reality: From Physics to Metaphysics (Cambridge University Press 2010), he says,

Each article explores the hypothesis that information is at the root of everything. And I mean everything – from atoms to, perhaps, a deity.

Well, that last’ll get attention.

Hmmm. Are the contributors trying to mock the intelligent design guys, but they lost the plot somewhere? Well,

The collection starts with historical essays by philosopher of science Ernan McMullin and philosopher-theologian Philip Clayton, who write about materialism (the worldview that states that the only thing that really exists is matter and that all other phenomena are just interactions between different pieces of matter) and its receding hold on philosophy. The stage being set, Davies and fellow physicist Seth Lloyd then present a physics perspective on information. Davies is without a doubt one of the best popular-science writers in the world, and his article demonstrates why. In it, he explains why, in light of modern physics discoveries, materialism is not the most viable philosophy. Lloyd then expands on this idea by introducing the notion that the universe is a giant information-processing device. This is a view that has emerged from my own field of research – quantum computation – and Lloyd is one of its most prominent advocates.

Hold that thought. Materialism is “not the most viable philosophy”?

Well, why did Baptist U Baylor shut down Dembski and Gordon’s Polanyi Center in 2002 for sponsoring a conference where lots of learned folk said substantially the same thing? Why was it big time heresy among … the Baptists when atheist Vedral is okay with it?

The pinnacle of this “theological” section, however, is the proposal by Keith Ward that deity is a form of information-theoretic principle. Ward’s proposal is related to the observation that the universe walks a fine line between total disorder and compete order. Logically, it would seem that disorder is a more natural state of affairs if things were left to themselves, and so to get some order out we clearly need an extra guiding principle. And this extra principle, Ward suggests, is synonymous with God – albeit a very different sort of God than an all-powerful creator. Now, there is a definition of God with which I might almost agree!

Naturally, I wish the editors had dumped the “theological” dreck with which atheist Vedral “might almost agree.” It prompts the question, “Why isn’t Bill Gates God? Oh wait, he is. Or no wait again, let me check my notes on who’s God.

But seriously, if it has now become okay to say that materialism is not the most viable philosophy, what is the world coming to?

What I’d like to know is, how will materialists find a way to pervert that observation so that it doesn’t mean what it says?

And what “information-theoretic” yes men (former materialist yes men) will we be hearing from soon?

3 Replies to “Jathink? Guy says materialism “not the most viable philosophy” and keeps job …”