Question: What is a sure sign that a scientific methodology has a big problem?

Answer: It’s proponents start making cartoons which are intended to ridicule an opposing view but end up having the opposite effect.

A few days ago, this cartoon showed up on Skeptic magazine writer Robert Camp’s blog, nightlight. This is apparently his first attempt at drawing one. 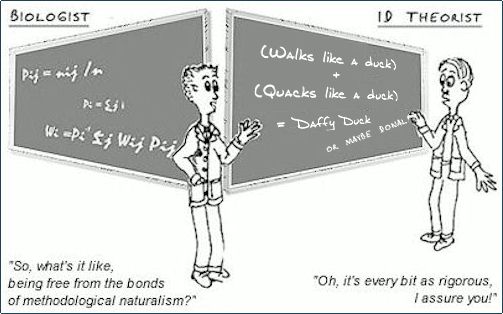 It’s obviously intended to poke fun at what ID opponents claim to be ID’s lack of scientific rigor, but I think it does a fine job of illustrating the lengths to which methodological naturalists will go to avoid the common sense simplicity of ID claims. If I were to redraw this cartoon, there’s really not very much I would change.

One particular feature of the cartoon that strikes me as odd is that the IDist is trying to name the duck. Of course, those familiar with ID know that its opponents are fond of saying that IDists avoid naming the designer as the Judeo-Christian God out of disingenuousness, so accordingly, if an IDist were given only the information that the subject of study “walks like a duck” and “quacks like a duck”, he would avoid giving the proper name of the duck only because he has something to hide. 😛