Until today, I’ve been keeping quiet about this developing story about Marcus Ross, a creationist PhD graduate from Rhode Island University. I wanted to protect him from media scrutiny until the news story finally broke. 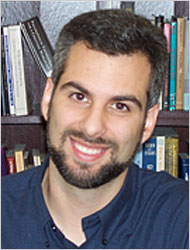 Now that the NY Times has reported it, I may as well publicly extend my congratulations to Marcus Ross. He serves as a role model for how ID proponents and even young earth creationists can matriculate through Darwinist controlled institutions.

But Dr. Ross is hardly a conventional paleontologist. He is a Ã¢â‚¬Å“young earth creationistÃ¢â‚¬Â Ã¢â‚¬â€ he believes that the Bible is a literally true account of the creation of the universe, and that the earth is at most 10,000 years old.

For him, Dr. Ross said, the methods and theories of paleontology are one Ã¢â‚¬Å“paradigmÃ¢â‚¬Â for studying the past, and Scripture is another. In the paleontological paradigm, he said, the dates in his dissertation are entirely appropriate. The fact that as a young earth creationist he has a different view just means, he said, Ã¢â‚¬Å“that I am separating the different paradigms.Ã¢â‚¬Â

For the pro-ID and creationist students out there, Ross shows how to make it through a Darwinist controlled secular institution. Ross was never deceptive about his beliefs, yet demonstrated he could accept Old Earth Darwinism as a working but falsifiable hypothesis. One has a better chance of overturning prevailing paradigms when one is well-versed in it. Accepting a wrong theory as a working hypothesis is no more a profession of faith than accepting the wrong idea that the square root of two is rational in order to prove it is irrational.