Quite a bit, say Jerry Fodor and Massimo Piatelli-Palmarini, in What Darwin Got Wrong.

They offer an interesting example, the ‘fourth dimension’ of living systems, 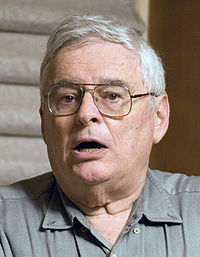 The body masses of living organisms vary between 10^-13 grams (bacteria) to 10^8 grams (whales), that is, by 21 orders of magnitude. It’s interesting to see how other physico-chemical and biological properties and processes, and their ratios, scale with mass. How, for instance, surfaces and internal rates of transport, rates of cellular metabolism, whole organism metabolic rate, heartbeat, blood circulation, time and overall lifespan scale with mass. Thee are, of course, all three-dimensional systems, so it seems astounding that all the scaling factors, encompassing microorganisms, plants and animals, are multiples of a quarter, not a third. ^16

Physicists and biologists at Los Alamos, Santa Fe and Albuquerque institutes attribute the “fourth dimension” to the fractal-like architecture of the organisms’ vascular networks. The guiding criteria, they found, was “the maximization of the inner and outer exchange surfaces, while minimizing distances of internal transport (thus maximizing the rates of transport).” They quote West et al. (1999),

“Although living things occupy a three-dimensional space, their internal physiology and anatomy operate as if they were four-dimensional. Quarter-power scaling laws are perhaps as universal and as uniquely biological as the biochemical pathways of metabolism, the structure and function of the genetic code and the process of natural selection.

In the words of these authors, natural selection has exploited variations on this fractal theme to produce the incredible variety of biological form and function’, but there were severe geometric and physical constraints on metabolic processes.’

The conclusion here is inescapable, that the driving force for these invariant scaling laws cannot have been natural selection. It’s inconceivable that so many different organisms, spanning different kingdoms and phyla, may have blindly ‘tried’ all sorts of power laws and that only those that have by chance ‘discovered’ the one-quarter power law reproduced and thrived.

Of course, the Darwinist puts questions like down to an entirely misguided reason for doubting Darwin, that their theory sounds unbelievable and  doesn’t add up. Richard Dawkins might say of Fodor, as he has of Mike Behe, that it is Fodor’s job to get back to work and show how Darwinism indeed accomplishes this feat.

On the other hand, Fodor could be on to something.

Note 2: The image of Jerry Fodor is from Wikimedia Commons.

20 Replies to “How much of the body plans of organisms can be explained by laws of form, not Darwinism or design?”