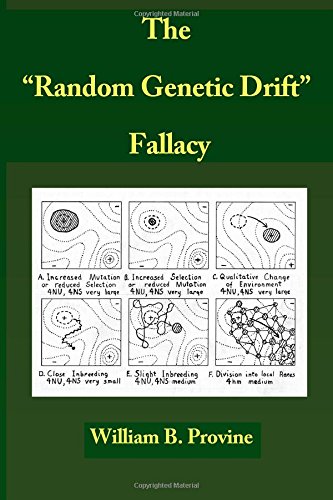 It’s not clear how many people have read the book; there are no reviews at Amazon.com.

According to the Berkeley evolution site,

It’s also unclear to an onlooker why random genetic drift would not be a demonstrable fact rather than a fallacy. A sinkhole in a rainforest might obliterate an otherwise viable species except for a few outliers who had wandered away from the species’ half acre, no?

But actually, anyone who “believes in” any claims about evolution needs help soon.

Evolution isn’t the sort of topic amenable to “belief,” only to the demonstration of evidence-based claims. When it becomes a form of belief, it becomes a religion. And we see so much of that among “sciencey-minded” people today.

Incidentally, Provine and a colleague did a study a while ago showing that evolutionary biologists are a highly diverse community where 78% are pure naturalist atheists.

Here is a defense of genetic drift in evolution by Michael Lynch. Readers?

5 Replies to “Evolutionary biologist Will Provine vs genetic drift?”