Today, Intervarsity Press (IVP) in the UK publish a new symposium, entitled “Should Christians Embrace Evolution?” edited by leading geneticist Professor Norman Nevin. Andrew Sibley has already posted about it on UD and linked to the preface. Believers in a God-guided Darwinism are preaching that Darwinism is a fact and that the Bible can be reconciled with it. This new book comprehensively refutes both ideas. Far from necessary, theistic evolution is both bad theology and bad science. It particularly interacts with Dr. Denis Alexander and his recent work, “Creation or Evolution – do we have to choose?”. 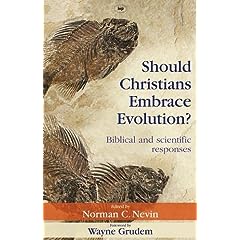 Here is the contents table from the first draft:

And here is the blurb about the authors from the first draft (minus mine which was inaccurate):

Geoff Barnard was for seven years a Senior Research Scientist at the in the Department for Veterinary Medicine, University of Cambridge, UK. He has been a Senior Lecturer in Biological Sciences at three other UK universities and visiting scientist at the Weizmann Institute in Israel.
Alistair Donald is Chair of Apologetics, Church of Scotland, and Chaplain at Heriot-Watt University. He holds a PhD in Ice Age Geology.
Steve Fuller is Professor of Sociology at the University of Warwick.
Greg Haslam is Senior Pastor at Westminster Chapel, London.
Phil Hills has been in pastoral ministry for the past twenty-three years and has led churches in Coventry, Birmingham and Swansea. He is currently the pastor of the Elim Church in Dundonald, Belfast. He has a Masters degree in theology from Manchester University.
R. T. Kendall is is an author, speaker, and teacher, and was pastor of Westminster Chapel, London, for twenty-five years.
Andy McIntosh is Professor of Thermodynamics and Combustion Theory at the University of Leeds (contributing here in a private capacity).
Alistair McKitterick is lecturer in Biblical and Theological Studies at Moorlands Theological College.
Norman C. Nevin OBE is Emeritus Professor of Medical Genetics at the Queen’s University, Belfast and Head of the Northern Regional Genetics Service.
Michael Reeves is the Theological Advisor for UCCF. Previously he was an associate minister at All Souls Church, Langham Place, London. He is the author of The Unquenchable Flame: Introducing the Reformation. He holds a doctorate in systematic theology from King’s College, London.
Andrew Sibley is studying towards a PhD in theology at a UK university examining the science, theology and philosophy of Intelligent Design arguments. He has an MSc from the Open University in Environmental Decision Making and works part time as a specialist weather forecaster in the environmental arena. He has authored a couple of books, including Restoring the Ethics of Creation, and has a keen interest in promoting social and environmental ethics from a Christian perspective.
John C. Walton is Research Professor of Chemistry at the University of St Andrews.

Available postage-included (to the UK) from Amazon UK for £7.50, here.

This is my first post at UD, so I’d better say “hi”, and thanks to Dr. Dembski for inviting me. Rather than an intro, I’ll just send you to my home page, here.