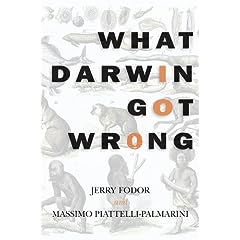 Jerry Fodor has been a critic of Darwinism for a few years now (see this article he wrote against it). Here is his latest in book form (go here to purchase). Amazon.com includes the following description:

From Publishers Weekly
The authors of this scattershot treatise believe in evolution, but think that the Darwinian model of adaptationism—that random genetic mutations, filtered by natural selection, produce traits that enhance fitness for a particular biological niche—is fatally flawed. Philosopher Fodor and molecular-biologist-turned-cognitive-scientist Piattelli-Palmarini, at the University of Arizona, launch a three-pronged attack (which drew fire when Fodor presented their ideas in the London Review of Books in 2007). For one thing, according to the authors, natural selection contains a logical fallacy by linking two irreconcilable claims: first, that creatures with adaptive traits are selected, and second, that creatures are selected for their adaptive traits. The authors present an ill-digested assortment of scientific studies suggesting there are forces other than adaptation (some even Lamarckian) that drive changes in genes and organisms. Then they advance a densely technical argument that natural selection can’t coherently distinguish between adaptive traits and irrelevant ones. Their most persuasive, and engaging, criticism is that evolutionary theory is just tautological truisms and historical narratives of how creatures came to be. Overall, the scientific evidence and philosophical analyses the authors proffer are murky and underwhelming. Worse, their highly technical treatment renders their argument virtually incomprehensible to lay readers. (Feb.)

Review
Praise for What Darwin Got Wrong
“Philosopher Fodor and cognitive scientist Piattelli-Palmarini challenge Darwinism more effectively than the entire creationist/intelligent-design movement has . . . Many may find this the hardest, absolutely essential reading they’ve ever done.” —Ray Olson, Booklist

“A challenging, intriguing argument that poses important scientific and philosophical questions about evolution . . . Fodor and Piattelli-Palmarini take a brave stance that will likely draw reaction . . . from across the scientific and theological spectrum. A dense, scholarly, engaging testament to modern scientific thinking and its ability to adapt and evolve.” —Kirkus Reviews

“From the shocking title onward, Fodor and Piattelli-Palmarini have set the cat among Darwin’s pigeons. In arguing why the operation of natural selection says nothing about the causal mechanisms underlying the evolution of coextensive traits in an organism, they take us to the conceptual fault line at the heart of Darwin’s theory. My prediction is that Fodor and Piattelli-Palmarini’s book will raise hackles galore wherever the theory of natural selection is all too glibly misused, not only in studies of the ontogeny and phylogeny of biology, but also in those great overlapping disciplines of philosophy, psychology, linguistics, and behavior—in short, human nature. This book will set the agenda for years to come. It cannot be ignored if the study of evolution is to be honest with itself.” —Gabriel Dover, Professor of Evolutionary Genetics, Universities of Leicester and Cambridge, and author of Dear Mr. Darwin: Letters on the Evolution of Life and Human Nature

“Evolution needs a persuasive theory if the struggle for public acceptance is to be won. Jerry Fodor and Massimo Piattelli-Palmarini’s bold treatise, What Darwin Got Wrong, convincingly shows that natural selection is not that theory. Drawing on scientific literature spanning the molecular, behavioral, and cognitive scales, with sophisticated excursions into evolutionary-developmental biology and the physics of complex systems, the authors perform a philosophical dismantling of the standard model of evolutionary change that is likely irreversible. Their unambiguous grounding in the factuality of evolution renders this work a service to science and a setback for its opponents.” —Stuart Newman, Professor of Cell Biology and Anatomy, New York Medical College

“In this provocative, enlightening, and very entertaining book, Fodor and Piattelli-Palmarini argue that natural selection (NS) cannot explain how evolution occurs. The argument is largely conceptual and proceeds in two steps: (1) that theories of NS are conceptually parallel to Skinnerian theories of learning and so share most of the same debilitating problems, and (2) that NS is actually in worse conceptual shape when its central explanatory notion, ‘selecting for,’ is properly unpacked. This argument will annoy a lot of important people, both for its conclusion and for the evident delight the authors display in getting to it. The ensuing fireworks should be delightful, and (possibly) enlightening.” —Norbert Hornstein, Professor of Linguistics, University of Maryland

“This highly informative and carefully argued study develops two central theses. First, there are alternatives to classical neo-Darwinian adaptationist theories that are plausible, and very possibly capture principles that are the rule rather than the exception even if the basic adaptationist account is accepted. Second, that account cannot be accepted. The two theses are sufficiently independent so that they can be evaluated separately. Whatever the outcome of intellectual engagement with this stimulating work, it is sure to be a most rewarding experience.” —Noam Chomsky

27 Replies to “What Darwin Got Wrong”