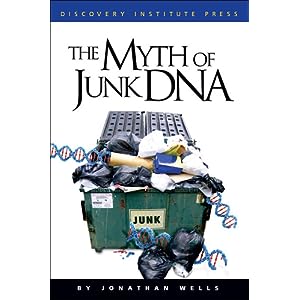 He sniffs that he might, in the end, review it, as time permits. One hopes he’ll read it first. Some readers of reviews like that sort of thing, and there is simply no accounting for tastes.

PZ Myers, however, has threatened to read the book.

Farrell (“Jonathan Wells’s “The Myth … of the Myth of Junk DNA,” May. 20 2011) claims that the idea that Darwinists ever thought that stuff was junk is itself a “myth”:

T. Ryan Gregory at Genomicron has tirelessly pointed out the problems with the myth argument over the past few years. He cites a number of articles from the journals of the time to show that scientists never dismissed junk DNA in the literature.

Oh? Indeed. But does Gregory cite the ones where they actually did dismiss it explicitly because it was the very junk that Darwinism predicted?

Discovery Institute’s Casey Luskin provides the missing citations in the Forbes combox, suggesting that it sounds as though Farrell has not read the book. That would be in no way unusual. In the context, not reading the book functions as form of censorship, because Farrell can misrepresent without lying, as he has done here. Many Darwinists are quite self-righteous enough to believe that they are rendering the world a service thereby.

Here’s genome mapper Francis Collins on junk DNA as supporting Darwinism, and here’s UD’s interview with Wells where he addresses Darwinists’ support of the concept.

Why is all this so reminiscent of the recent Beckwith-Forrest-Synthese uproar, that made it into the New York Times? Could it be the demand for public belief in an evidently false proposition?

Your point (A) is an attempt to rewrite history, which is a predictable response to the overwhelming mass of evidence Jonathan Wells compiles in his book showing that evolutionary scientists have predicted that much of the genome is junk. In fact, John Avise’s book from which you quote refutes your first point. As Jonathan Wells documents:

In 2010, University of California Distinguished Professor of Ecology & Evolutionary Biology John C. Avise published a book titled Inside the Human Genome: A Case for Non-Intelligent Design, in which he wrote that “noncoding repetitive sequences—‘ junk DNA’—comprise the vast bulk (at least 50%, and probably much more) of the human genome.” Avise argued that pseudogenes, in particular, are evidence against intelligent design. For example, “pseudogenes hardly seem like genomic features that would be designed by a wise engineer. Most of them lie scattered along the chromosomes like useless molecular cadavers.” To be sure, “several instances are known or suspected in which a pseudogene formerly assumed to be genomic ‘ junk’ was later deemed to have a functional role in cells. But such cases are almost certainly exceptions rather than the rule. And in any event, such examples hardly provide solid evidence for intelligent design; instead, they seem to point toward the kind of idiosyncratic tinkering for which nonsentient evolutionary processes are notorious.”

Avise also published an article in Proceedings of the National Academy of Sciences USA titled “Footprints of nonsentient design inside the human genome,” in which he repeated the same argument. “Several outlandish features of the human genome,” he wrote, “defy notions of ID by a caring cognitive agent,” but they are “consistent with the notion of nonsentient contrivance by evolutionary forces.” For example, “the vast majority of human DNA exists not as functional gene regions of any sort but, instead, consists of various classes of repetitive DNA sequences, including the decomposing corpses of deceased structural genes.”