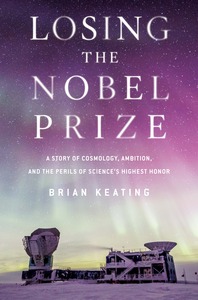 Astronomer Brian Keating has a new book out, Losing the Nobel Prize, detailing the rise and fall of an apparent confirmation of cosmic inflation in 2014. From the publisher:

In 2014, astronomers wielding BICEP2, the most powerful cosmology telescope ever made, revealed that they’d glimpsed the spark that ignited the Big Bang. Millions around the world tuned in to the announcement broadcast live from Harvard University, immediately igniting rumors of an imminent Nobel Prize. But had these cosmologists truly read the cosmic prologue or, swept up in Nobel dreams, had they been deceived by a galactic mirage?

The latter, it would seem. A free excerpt is available at Nautilus:

The broadcast from Harvard’s Center for Astrophysics captivated media around the world. Nearly 10 million people watched the press conference online that day. Every major news outlet, from The New York Times to the Economist to obscure gazettes deep within the Indian subcontinent, covered the announcement “above the fold.” My kids’ teachers had heard about it. My mother’s mahjong partners were kvelling about it.

Watching the live video, I could see MIT cosmologist Max Tegmark reporting the event. He wrote, “I’m writing this from the Harvard press conference announcing what I consider to be one of the most important scientific discoveries of all time. Within the hour, it will be all over the web, and before long, it will lead to at least one Nobel Prize.”

Max Tegmark is the author of a theory that there are four layers of multiverses (speculation squared?) and another that consciousness is caused by a type of matter called perceptronium. So one might consider not putting all of one’s good shirts in the suitcase for Stockholm…

Within three weeks of the press conference, 250 scientific papers had been written about our results. That was astonishing; a paper is considered “famous” if it has 250 citations over the course of decades!

With the Planck 353 GHz paper appearance came the beginning of the end of the BICEP2 team’s inflation elation. Although the Planck team was careful to release no data for the Southern Hole, the field where BICEP2 observed—perhaps out of fear we would digitize it—they made a blunt assessment of the potential amount of dust polarization contamination in the Southern Hole, saying it was of “the same magnitude as reported by BICEP2.” This meant dust was as likely a culprit for our B-modes as were inflationary gravitational waves.

Later, the Planck team produced an image of the Milky Way’s dust polarization, finally including our patch of sky, the Southern Hole. It was mesmerizing; large swaths of sky festooned with azure streamers, whorls of ocher, and swaths of amber garland. Dust was showing off in all its Van Gogh vainglory.

Yes, it was dust, and the hopes of a Nobel blew along with it.

From Peter Woit at Not Even Wrong:

Unlike the Watson book, which is about a great scientific achievement, the unusual aspect of Keating’s story is that what he was involved in was not a success, but the biggest fiasco in the history of his field. On March 17th, 2014, the New York Times reported on its front page that Space Ripples Reveal Inflation’s Smoking Gun, and this same story was reported by most media outlets. This was based on results from the BICEP2 telescope unveiled at a press conference at Harvard (press release First Direct Evidence of Cosmic Inflation). At the press conference, PI John Kovac claimed that the chance the results were a fluke was only one in 10 million.

I wrote several blog postings about the story as it evolved, you can find them here, here, here and here. The BICEP2 result was often portrayed as a definitive experimental vindication of the multiverse, which was one reason I was writing about it. By the later postings, I was covering the story of the collapse of the BICEP2 claims, as it became clear that what they had measured was a signal coming from dust in the galaxy, not from primordial gravitational waves.More.

Sabine Hossenfelder, who does not seem to be a fan, explains at BackRe(Action) why she doesn’t think he should have got a Nobel Prize anyway:

B-mode polarization from primordial gravitational waves would have been an indirect detection of gravitational waves, but there was a Nobel Prize for that already and being second doesn’t count. And in contrast to what Keating states in the book, this detection would not have been evidence for quantum gravity because the measurement wouldn’t have revealed whether the waves were or weren’t quantize.

Neither for that matter, would it have been evidence for inflation. As Keating himself notes in the passing by quoting Steinhardt, models for inflation can predict any possible amount of B-modes. He doesn’t mention it, but I’ll do it for him, that some models without inflation also predict B-modes.

So the claim that B-modes would be evidence for inflation is already wrong. Even worse, Keating repeats the myth that such a detection would moreover be evidence for the multiverse because that just sounds so spectacular. But it doesn’t matter how often you repeat this claim it’s still wrong, and it isn’t even difficult to see why. If you want to make any calculation to predict the B-mode spectrum you don’t need to begin with a multiverse. All you need is some effective theory in our universe. And that theory may or may not have an inflaton. More.

Maybe the search for the multiverse isn’t really a science-based enterprise but a quest for a convincing naturalist philosophy. In that case, it is perhaps best not to meddle with data.

2 Replies to “BICEP2: The day the multiverse turned to dust – and so did someone’s Nobel, as a result”