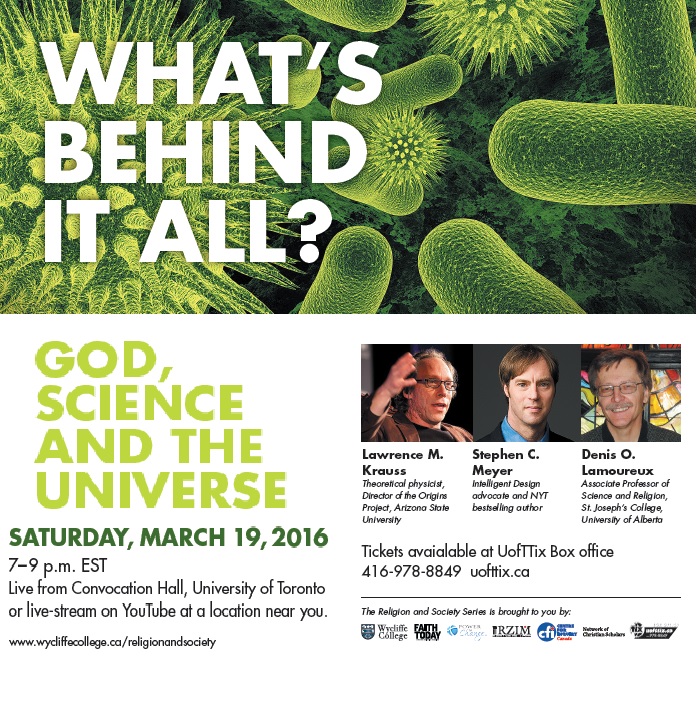 From David Klinghoffer, editor of Evolution News & Views: on the Toronto debate between Steve Meyer, Lawrence Krauss, and Denis Lamoureux

It was not the ideal of a clash between ID and Lawrence Krauss’s atheism that one would hope for. However, the event was something else, in a way, of no less interest. It was a dramatic test and acting out of character. Almost as if it had been intelligently designed that way. Meyer’s courageous performance, while not his most articulate, was in a moral sense heroic.

When all was said and done, Meyer with a migraine offered a whole lot more substance than either of his interlocutors. In addition, he was a gentleman throughout. His argument was about science and nothing but science. He never stooped to slander or condescension.

Krauss opened with a vicious and dishonest attack on Discovery Institute (“rather moribund right-wing creationist group”) and on Steve personally, emphasizing themes of pushing ID into public high schools (which Steve and Discovery have always opposed) and the Dover decision. Presumably because Krauss isn’t conversant with the biology behind the argument for ID, he relied on the critique cribbed by Judge Jones from the ACLU. More.

But David, that’s who Krauss is. Krauss is a product of his times. Here’s Krauss whining about his encounter with William Lane Craig (2011). But that sells.

It sells because tenured asshats need to believe it, not because it makes any sense. Even the Royal Society has become concerned about the danger to its brand that the evolution of the Darwin asshat [conference papers solicited] illustrates. Whether the Society can do anything about entrenched academic and popular Darwinism, given the deep-seated cultural need it caters to, is a matter about which we can only ask: Are its current officeholders prepared to do battle with masses of sludge, protected by connivance?

Denis Lamoureux was not my cup of tea. Unlike Meyer, who made no appeal to personal religious experience, Scripture, or theology, because he doesn’t need to, Lamoureux offered history, theology, simplistic Scriptural exegesis, biography, autobiography, personal belief, ancient mythology and poetry, with a splash of dental evolution. Lamoureux included on one of his slides the contention that he personally has experienced miracles.

Some, though not all, theistic evolutionists share a certain fulsome, unctuous manner, almost a signature style, when it comes to dealing with their own religious beliefs. He said, “Steve is a friend. Steve is a brother in Christ,” “I’ve prayed with Steve,” “I don’t want to do this but I have to do it.” Yet the same Christian brother, who whistles through his teeth when he talks, spent much more energy in attacking Meyer than he did in attacking Krauss. He encouraged the atheist by exclaiming at one point, “Preach it brother!” and assured the audience “I resonate deeply with Dr. Krauss.” Yes, it seems so.

Well, brother Klinghoffer (my sometimes editor is an observant Jew [ 😉 ]), most folk in Canada who take the ID controversy seriously, regardless of their perspective, left Lamoureux and his colourful testimonies on a siding in the wilderness some time ago. His schtick goes down way better with Christians who are slowly thinking their way away from Christianity toward naturalist atheism.

After all, there is no essential difference between “theistic” evolution and metaphysical naturalism (nature is all there is).

Please consider: There would be no debate but for Meyer. His migraine was support staff. While he was disabled, the others capered on, unable to get past vitriol or testimonies and deal with the issues around design. That is where we are now.

If a serious debate ever happens, I sure hope it is in Toronto, a world class city where I lived for nearly fifty years. – (Denyse O’Leary for News)