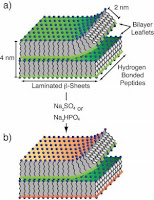 As many critics have pointed out, evolutionary theory has biased the life sciences with its view of spontaneity. In this universe, things just happen to happen. And that includes the most complicated, least understood thing of all—life. This is the religiously-motivated “just add water” view of biology that makes little scientific sense. Now an evolutionist has appropriately used this very phrase to describe yet another evolutionary take on how life got its start.  Read more