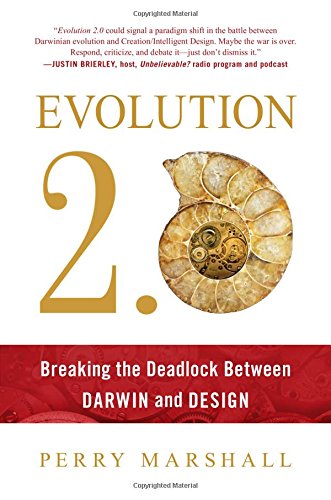 From David Snoke’s review at the Christian Scientific Society of Perry Marshall’s Evolution 2.0: Breaking the DeadlockBetween Darwin and Design

Perry Marshall is a well known, successful expert on internet marketing, and his career has included developing new algorithms and paradigms in business and market analysis. For several years, he has been involved in online discussions about intelligent design and evolution. He has now come out with a book giving a comprehensive presentation of his views. The book will be quite useful as an introduction to the debate, especially for those who are not experts in biology. His writing style is easy to read and to the point.

Here are some of the things I like about the book:

1) He gets the biology right. In Part 3 of the book, he summarizes many of the mechanisms understood by all experts in biology to be part of the story, but which often get left out or marginalized in the debate. Some biologists smugly dismiss anti-evolutionists who don’t refer to many of the newly discovered mechanisms in biological adaption. But Marshall shows that a good understanding of these mechanisms doesn’t make the case for undirected evolution any easier.

That is indeed the main issue, if not the only one.  Certainly, it is the one that we hear the most ridiculous bafflegab around.

But I don’t believe for a minute that the deadlock can be broken. No Darwin follower or Christian for Darwin (if anyone now cares) wants honest accounting.

Darwinism is a well-funded, sometimes legislated, dead idea. Which means it can keep going indefinitely without any evidence whatever, only funding and legislation.

And rare is the science journalist who considers the case honestly, as opposed to waving pom poms in defense of his or her career.

Serious consideration of design in nature will have a hard time gaining a foothold, despite massive evidence ( see convergent evolution, for example).

But people are funded to write things like this:

When Behe claims that irreducible complexity is best explained by a designer, Jantzen reminds us that best is a comparative term and can only mean “best among the known explanations.” If history is any guide here, we should expect that we don’t yet know all the possible explanations, so Behe’s claim [design in nature] is considerably weakened.

As noted earlier, the fact that we don’t know all possible explanations has never prevented anyone from honestly making a reasonable judgment.

Unless that person have already decided that metaphysical naturalism and mindless materialism must be true regardless of the state of the evidence. Which is what gets funding nowadays. (Hollers for Jesus are an added perk in some venues, for those interested.)

10 Replies to “Finally, a book on the ID debate that addresses actual issues”