Since self-organization theory, the Darwin lobby, and the Texas science standards have all been in the Inbox lately, it’s only fair that we have a look at the Texas Darwin  lobby’s view of self-organization or self-replicating life (standard proposed in 2009):

(9) Science concepts. The student knows the significance of various molecules involved in metabolic processes and energy conversions that occur in living organisms. The student is expected to:

(D) analyze and evaluate the evidence regarding formation of simple organic molecules and their organization into long complex molecules having information such as the DNA molecule for self-replicating life.

This is a clear example of the incorporation of intelligent design/creationist language into student expectations and parallels the “complexity of the cell” language found in the new TEKS (7)(G). The problematic assertion here stems mainly from the writings of Discovery Institute Fellow William Dembski. Dembski asserts that an intelligent designer must be involved in the creation of meaningful information whenever “specific complexity” is found because his own “Law of Conservation of Complex Specified Information” prevents natural selection from increasing the amount of information in a genome (see reference 1 and citations within). Dembski’s argument requires that information be complex (have a very low probability of being produced by random processes) and that it be “meaningful.” Meaningful information in the case of genetic sequences such as in DNA can be inferred to be those that increase the fitness of an organism (make it well adapted or better adapted to its environment).

Gosh, whatta reason. A lot of us here are Bill Dembski fans/friends/friendly critics/people he lets park in his back yard for free. So far as I know, Dembski was never a self-organization of life fan and has nothing to do with the development of the theory. Indeed, the self-organization guys have been known to critique his theories too.

Only a tinfoil hatter would think Dembski so important that he is the reason Texas students cannot be told about self-organization theory when, in fact, it is increasingly the direction of origin of life studies, and he has nothing to do with it.

We must use the time available in our children’s science education for presenting real evolutionary mechanisms – supported by scientific evidence – and not dilute curriculum materials with unsubstantiated musings of intelligent design creationists.

Out there, we hear about everything from “chemical minestrone” to “silica world.” The current hot theory is ammonia; next year, maybe, baking soda. It’s part of my job to record this origin of life stuff, and I can’t keep up.

My suggestion to Texas would be, just don’t emphasize origin of life in school. I’m not saying it’s not science or not interesting, but it is in no fit state to be presented in the classroom in any serious way. If, despite my excellent advice, Texas teachers must address the subject, they should certainly be free to mention self-organization, whether the local foilhats like it or not.

(Note:I hope everyone admires the glorious china collection below, which I photographed recently at a retirement villa.) 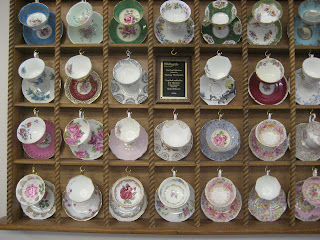 5 Replies to “From the “Shut up, Texas losers, and pay” files: Why Texas students cannot know about self-organization theory”