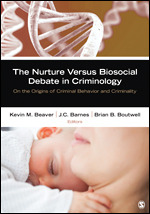 From Brian Boutwell and J.C. Barnes at the Boston Globe:

Ah, heritability. A term that is much maligned in disciplines like criminology and often serves as a wellspring of confusion.

Well, in Carrie Buck’s case, it wasn’t exactly confusion, was it?:

The vote was 8 to 1. Justice Oliver Wendell Holmes Jr.’s opinion dispensed with young Carrie Buck’s physical integrity in five paragraphs, the six cruelest words of which characterized Virginia’s interest in preventing Buck from burdening the state with her defective offspring: “Three generations of imbeciles are enough.”

More from Boutwell and Barnes:

That’s funny when one considers that it takes a few seconds to transmit a genetic inheritance and nearly 19 years to raise an adult human being. Why has parenting suddenly become unimportant? Well, …

The more technical term for this phenomenon is genetic confounding, and there is reason to believe that it is endemic to much of the research coming out of the social sciences in general, and criminology in particular. Our own research into the issue suggests that even a modest amount of unmeasured genetic influence can pollute and infect your findings. As a result, much of what we think we know about the causes of crime could be overstated or just flat wrong. More.

Oh well, guys, if we are only writing to trash the social sciences, we are late to the party. Even “skeptic” Michael Shermer and science writer Ed Yong beat us to it, with  casts of thousands.

But the problem with the social sciences is not a predilection for seeking environmental causes. That’s a natural bias, one that is often fruitful.

No, the problem with the social sciences is monochrome progressive (liberal) bias. That results, among other things, in plenty of Sokal hoaxes and fraud.

But anyway, what about epigenetics? As Lee Spetner, author of The Evolution Revolution puts it, “Epigenetics is the study of effects on the genome itself.” Genes and environment mutually influence each other, so… So where does this leave the genes-only thesis?

Note: Brian Boutwell crossed our radar earlier this year also, to say that according to his research, parenting doesn’t matter.

Something else rang a bell. Boutwell and Barnes are editors of The Nurture Versus Biosocial Debate in Criminology, which “aims to facilitate an open and honest debate between the more traditional criminologists who focus primarily on environmental factors and contemporary biosocial criminologists who examine the interplay between biology/genetics and environmental factors.” That is, to provide a forum for those who believe there is a “crime gene.”

Note 2: “Afraid to ask”? O’Leary for News’ dad went to see the first Godfather film yay years ago. Asked whether he liked it, he said, “I was afraid not to.”

Many of us wish these genetic determinists did feel safe to just ask. So that we can all see how much science is moving beyond their approach.

See also: There’s a gene for that… or is there?