Origin of life researcher Nick Lane, author of The Vital Question asks at The Scientist:

Did endosymbiosis-and the innovations in membrane bioenergetics it engendered-make it possible for eukaryotic life to evolve?

There’s a black hole at the heart of biology. Why is it that complex eukaryotic cells share so many fundamental traits, from the nucleus to meiotic sex, which are essentially absent from prokaryotes? Most people would be hard pressed to distinguish a human cell from those of a mushroom, a plant, or a zoospore. Yet those cells diverged a billion years ago, and have utterly different ways of life.

He argues at The Scientist for membrane bioenergetics:

Genes point to an answer, but don’t explain the whole story. All eukaryotes share a common ancestor that arose just once in four billion years of evolution. This ancestor was recognizably a modern eukaryotic cell, with a long list of characteristics inherited by its varied descendants, including straight chromosomes, introns and exons, nuclear pore complexes, dynamic cytoskeleton, endomembranes, sex, and mitochondria. 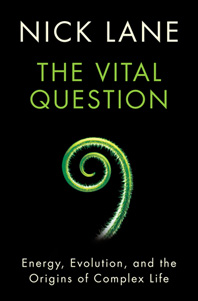 In my latest book, The Vital Question, I argue that the answer lies in energy—specifically, the totally unanticipated mechanism of membrane bioenergetics. Essentially all cells rely on electrochemical ion gradients (usually proton gradients) across membranes to drive the synthesis of adenosine triphosphate (ATP). Autotrophs rely on membrane bioenergetics to drive carbon fixation, too. In fact, all carbon and energy metabolism depends on proton gradients across membranes.

In The Vital Question, I posit that the basal traits of eukaryotes were forged in the crucible of endosymbiosis between prokaryotes, which drove the evolution of sex, the nucleus, the germline-soma distinction, aging, and death. These ideas might be wrong, but they are testable, and could have considerable explanatory power. I think we’ll only understand why life is the way it is when we bring energy into the equation.

Lane seems to think that energy can create or substitute for huge amounts of information. This seems wrong but it is apparently acceptable to The Scientist. Thoughts?

See also: Other reasons why origin of life in general is such a baffling problem.

15 Replies to “Origin of complex cells: Can energy create information?”