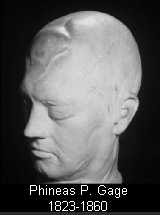 From Steve Twomey at the Smithsonian Magazine (2010), presumably a vintage article recycled this morning or so, without context, about the catastrophic brain injuries that supposedly greatly changed a man’s personality (psych lecture room staple):

Gage’s initial survival would have ensured him a measure of celebrity, but his name was etched into history by observations made by John Martyn Harlow, the doctor who treated him for a few months afterward. Gage’s friends found him“no longer Gage,” Harlow wrote. The balance between his “intellectual faculties and animal propensities” seemed gone. He could not stick to plans, uttered “the grossest profanity” and showed “little deference for his fellows.” The railroad-construction company that employed him, which had thought him a model foreman, refused to take him back. So Gage went to work at a stable in New Hampshire, drove coaches in Chile and eventually joined relatives in San Francisco, where he died in May 1860, at age 36, after a series of seizures.

Gage actually led a reasonably normal life after a period during which he recovered without the help that rehab techniques available today might have provided. Given that it was difficult to prevent seizures in his day it is not surprising that thy claimed his life in 1860.

In time, Gage became the most famous patient in the annals of neuroscience, because his case was the first to suggest a link between brain trauma and personality change. In his book An Odd Kind of Fame: Stories of Phineas Gage, the University of Melbourne’s Malcolm Macmillan writes that two-thirds of introductory psychology textbooks mention Gage. Even today, his skull, the tamping iron and a mask of his face made while he was alive are the most sought-out items at the Warren Anatomical Museum on the Harvard Medical School campus. More.

Right. And the 12,500 or so Facebook sharers won’t know that the lecture-room claims are mainly bunk. Skinny:

“So the textbooks mostly won’t tell you about Gage’s rehabilitation, or provide you with the latest evidence on his injuries. Instead, you might hear how hear never worked again and became a vagrant, or that he became a circus freak for the rest of his life, showing off the holes in his head. “The most egregious error,” says Griggs, “seems to be that Gage survived for 20 years with the tamping iron embedded in his head!”.” – British Psychological Society Research Digest

Yes, indeed. The record is often “corrected” by organizations who successfully perpetrated the myth, merely to spare scandal, now that the damage is conveniently done.

This may be one of those situations where a Society attempts to correct the record long after their desired result—millions misinformed in favour of metaphysical naturalism—is achieved beyond hope of recall.

So bunk is still recycled as an uncorrected classic. Naturalist superstitions around brain damage continue to receive a lecture room boost. And you, reader, pay taxes or even go into personal debt for this. Or suffer the consequences of approved bunk-ology if you yourself ever struggle with brain damage.

Back to school briefing: 7 myths of social psychology. Many lecture room icons from decades past are looking tarnished now.

5 Replies to “Phineas Gage files: Funny how the naturalist legend so long outlived the man…”