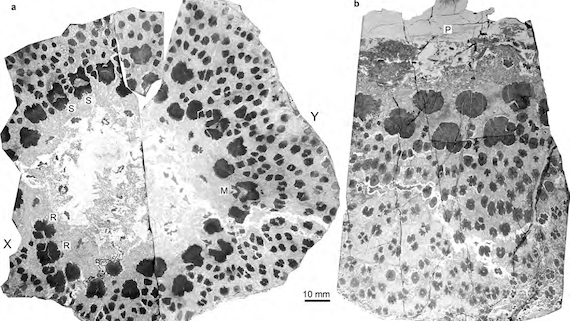 Fossils from a 374-million-year-old tree found in north-west China have revealed an interconnected web of woody strands within the trunk of the tree that is much more intricate than that of the trees we see around us today.

The strands, known as xylem, are responsible for conducting water from a tree’s roots to its branches and leaves. In the most familiar trees the xylem forms a single cylinder to which new growth is added in rings year by year just under the bark. In other trees, notably palms, xylem is formed in strands embedded in softer tissues throughout the trunk.

Writing in the journal Proceedings of the National Academy of Sciences, the scientists have shown that the earliest trees, belonging to a group known as the cladoxlopsids, had their xylem dispersed in strands in the outer 5 cm of the tree trunk only, whilst the middle of the trunk was completely hollow.

“This raises a provoking question: why are the very oldest trees the most complicated?” More.

Indeed. How did we know Darwinism was true? Because the first plants were simplest, right?

So would a Darwinian account of life have predicted this? Does it predict anything? Is there anything about it that is actually true in a science-based way?

Note: It might be best not to try to answer the “thought-provoking question” until we find out more about the environment to which the first trees have adapted themselves in such a complex way in a comparatively short period of time.

See also: From Biology Direct: Darwinism, now thoroughly detached from its historical roots as a falsifiable theory, “must be abandoned”

Stasis: When life goes on but evolution does not happen

5 Replies to “Researchers: Earth’s first trees were also “most complex””