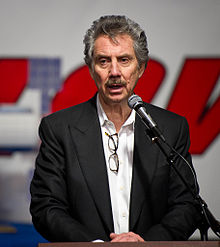 From Jeanna Bryner at LiveScience:

Bigelow noted during the interview May 28 that his grandparents spotted a UFO on a canyon road outside Las Vegas: “It really sped up and came right into their face and filled up the entire windshield of the car. And it took off at a right angle and shot off into the distance,” he told “60 Minutes” reporter Lara Logan.

“Do you believe in aliens?” Logan asked. “I’m absolutely convinced and that’s all there is to it,” said Bigelow, founder and CEO of the commercial space company Bigelow Aerospace. “There has been and there is an existing presence, an E.T. presence.”

When asked if he expects to see forms of intelligent life as humans explore the universe, Bigelow replied, “You don’t have to go anywhere. … It’s just, like, right under people’s noses.” More.

Of course, if that is what he believes, evidence seems superfluous.

See also: How do we grapple with the idea that ET might not be out there?

NASA cares what your religion thinks about ET Also:  More on that.

The space alien fan groups at YouTube are having a field day with this.