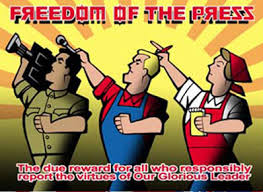 … the Canadian government is currently considering a bill which would amend the hate speech section of the Criminal Code in ways that expand the reach of the Act and give the government greater power over the content of what Canadians may say.

Yes, it’s Canadian, but this idea will surely catch on elsewhere. Specifically,

What has drawn the ire of those who worry about the threat to free expression contained by the phrase “creating a hyperlink” is that one may be investigated, charged, and even fined and imprisoned for simply linking to (i.e., “making available” to others) a site considered by the authorities to be hate-promoting. Nor is this provision easily cabined. It would apply to “any means” of communication. This would include words (written or spoken) in any manner — including all print, oral, and internet “social media” (cell phones, iPads, iPhones, iPods, Facebook, Twitter, blogs) and whatever other media are either currently available or about to be introduced. The fear of some critics is that one could accidentally run afoul of the law by innocently linking to a suspect site. Other opponents of the legislation argue that the state has no business at all checking into one’s linking history. All of the bill’s critics are aghast at the range of the types of media that are included in the legislation.

It’s tailor-made for the growing number of people who think the world would be a much better place if they gained intimate control over other citizens lives – the least demonstrated proposition in the history of the world. Fortunately for them, “hate” is an increasingly elastic category – sometimes nothing more than a non-standard opinion, as Canadian experience shows.

Put together the criminal hyperlink with the new Quebec proposal to create a class of first vs. second class journalists (mainly bloggers), and it’s fairly obvious where it’s all headed: Major media increasingly publish and broadcast for a government audience and culture, and governments would like to eliminate the independents who think What People Should Not Think and Convey Information Better Not Conveyed.

Can governments succeed in getting control of the Internet? Probably not, ultimately. But they can target you in an inquisition from Hell while they slowly fail. An inquisition on any subject that a pressure group has made important.

Well-known commentator on the university-led decline of free speech:

One Reply to “The criminal hyperlink, and how it affects you”