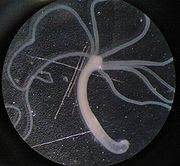 As discussed here, even the so-called third eye, which merely provides light sensitivity to its owner such as the iguana, involves incredibly complex biochemistry. Whereas evolutionists have always envisioned a neat ladder-like pathway of increasing functionality in vision systems, even rudimentary vision such as the third eye reveals stunning complexity. This notion of increasing functionality and complexity was advanced by Darwin who, after admitting that the evolution of the eye seemed absurd in the highest possible degree, decided that unless a critic can falsify his evolutionary thought experiment it must be a perfectly reasonable idea:  Read more

One Reply to “The Hydra’s Opsin: Doubling Down on Early Vision Complexity”