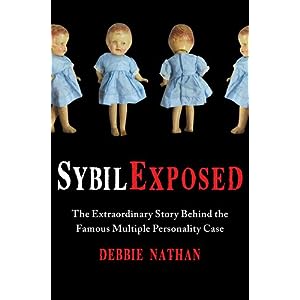 In “Sally Field’s ‘Sybil’ was a lie: Best-selling child abuse and split personality author exposed as a FAKE,” (October 17, 2011), the Daily Mail reports,

The shocking account of Sybil, a girl with 16 separate personalities that developed as a result of horrendous childhood abuses, sold seven million copies, and even spawned a recognised syndrome, ‘multiple personality disorder.

The 1973 book told the story of Sybil Dorsett, later revealed to be Shirley Mason, whose personality had been splintered into more than a dozen distinct characters including a baby and two males.

But the titillating tale, serialised across the nation, has now been exposed as a fake, concocted by three women as a calculated money-making invention.

It’ll be interesting to see whether the new book, Sybil Exposed deals with the terrible legal abuses perpetrated in the name of this pseudoscience, destroying lives, careers, and families on the basis of fantasies concocted by people whose grasp of reality was at best insecure.

News staff here have known about all that and more for decades, while writing for the Christian press. But it wasn’t popular to say so directly two decades ago. For one thing, many Christians bought into the pseudoscience, and treated caution and doubt as evidence of hard-heartedness.

We remember a somewhat dimwitted doctor explaining that she was treating a patient for multiple personality disorder, which was verified by the fact that the adult patient sometimes talked like she was eight years old. Which proved it conclusively. Leaving no remainder except the bad will of skeptics like us.

At that point, we hard-hearted just checked out, under a cloud: We were supposedly the modern supporters of the Canaanite massacre of children – responsible for the evils of devil worship, etc.

Yes, there was a devil in there, and there were murders; the best-known victims were Evidence, Reason, and Logic. So when Darwin worship hit the Christian community more recently, we had no illusions whatever about what we would encounter. And have not since been surprised.

6 Replies to “When science becomes a frontal assault on reason and evidence: Multiple personality syndrome”