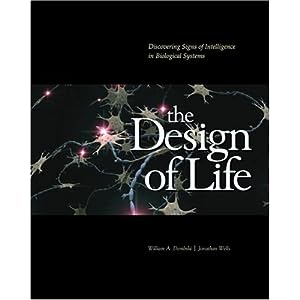 The controversial textbook, The Design of Life came up recently. (Did an origin of life researcher actually read it? Stunner.)

Instead of the approved textspeak about how hardworking scientists are slowly piecing together the origin of life, it contains eye-openers like these:

To ascribe a purely material origin to life is to affirm that life is, without remainder, chemistry. Harvard chemist George Whitesides spoke on his very point to and for the 160,000-member American Chemical Society when in 2007 he received the society’s highest honor, the annually awarded Priestley medal. As part of this honor, Whitesides delivered an award address in which he discussed the origin of life: “This problem [of life’s origin] is one of the big ones in science. It begins to place life, and us, in the universe. Most chemists believe, as do I, that life emerged spontaneously from mixtures of molecules in the prebiotic Earth. How? I have no idea. ” Even so, Whitesides added that if anyone is going to resolve this problem, it will be the chemists: “The cell is a bag—a bag containing smaller bags and helpfully organizing spaghetti—filled with a Jell-O of reacting chemicals and somehow able to replicate itself. ” (p. 250)

Sources ask, if you were a student, would you want to know that a recent award winner has “no idea” how it happened or that “hardworking scientists are slowly piecing together the origin of life”?

Here’s the eye-opening address. Here are more comments on the origin of life problem.

If legacy mainstream media: Slam dunk proof that ID-friendly texts are dangerous and should be illegal.

If new media: It’s your education, your time, your money. Should you be allowed to know that this whole origin of life field could be a big time/money sink? Bigger  question: Should you attend a school where you are not allowed to know it?