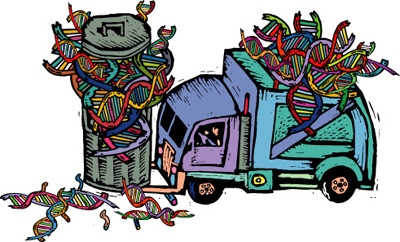 Readers will likely recall the ENCODE project, published in a series of papers in 2007, in which (among other interesting findings) it was discovered that, even though the vast majority of our DNA does not code for proteins, the human genome is nonetheless pervasively transcribed into mRNA. The science media and blogosphere is now abuzz with the latest published research from the ENCODE project, the most recent blow to the “junk DNA” paradigm. Since the majority of the genome being non-functional (as has been claimed by many, including notably Larry Moran, P.Z. Myers, Nick Matzke, Jerry Coyne, Kenneth Miller and Richard Dawkins) would be surprising given the hypothesis of design, ID proponents have long predicted that function will be identified for much of our DNA that was once considered to be useless. In a spectacular vindication of this hypothesis, six papers have been released in Nature, in addition to a further 24 papers in Genome Research and Genome Biology, plus six review articles in The Journal of Biological Chemistry.

The lead publication of the finding (“An Integrated Encyclopaedia of DNA Elements in the Human Genome“) was released in Nature. The abstract reports,

“The human genome encodes the blueprint of life, but the function of the vast majority of its nearly three billion bases is unknown. The Encyclopedia of DNA Elements (ENCODE) project has systematically mapped regions of transcription, transcription factor association, chromatin structure and histone modification. These data enabled us to assign biochemical functions for 80% of the genome, in particular outside of the well-studied protein-coding regions. Many discovered candidate regulatory elements are physically associated with one another and with expressed genes, providing new insights into the mechanisms of gene regulation. The newly identified elements also show a statistical correspondence to sequence variants linked to human disease, and can thereby guide interpretation of this variation. Overall, the project provides new insights into the organization and regulation of our genes and genome, and is an expansive resource of functional annotations for biomedical research.” [emphasis added]

They further report that,

“[E]ven using the most conservative estimates, the fraction of bases likely to be involved in direct gene regulation, even though incomplete, is significantly higher than that ascribed to protein- coding exons (1.2%), raising the possibility that more information in the human genome may be important for gene regulation than for biochemical function. Many of the regulatory elements are not constrained across mammalian evolution, which so far has been one of the most reliable indications of an important biochemical event for the organism. Thus, our data provide orthologous indicators for suggesting possible functional elements.”

As this Nature press release states,

“Collectively, the papers describe 1,640 data sets generated across 147 different cell types. Among the many important results there is one that stands out above them all: more than 80% of the human genome’s components have now been assigned at least one biochemical function.” [emphasis added]

The UK Guardian also covered the story, noting that

“For years, the vast stretches of DNA between our 20,000 or so protein-coding genes – more than 98% of the genetic sequence inside each of our cells – was written off as “junk” DNA. Already falling out of favour in recent years, this concept will now, with Encode’s work, be consigned to the history books.” [emphasis added]

This new research places a dagger through the heart of the junk DNA paradigm, and should give adherents to this out-dated assumption yet further cause for caution before they write off DNA, for which function has yet to be identified, as “junk”. Be sure to also check out Casey Luskin’s coverage of the findings at ENV.