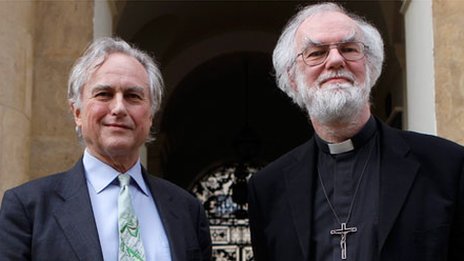 Richard Dawkins and Rowan Williams will discuss religion on Thursday

Richard Dawkins and Rowan Williams are to discuss the role of religion at a Cambridge Union debate.

Prominent atheist Prof Dawkins and the former Archbishop of Canterbury will discuss whether “religion has no place in the 21st Century” on Thursday.

They were involved in a public discussion at Oxford University last year.

Ben Kentish, president of the union, said it should be a highlight of the debating society’s 200-year history.

“Our speakers are the most renowned commentators on this subject,” he said.

In Cambridge, about 1,000 students will be in the audience.

“The prospect of seeing Professor Dawkins and the former Archbishop of Canterbury debate the subject is particularly exciting for our members,” Mr Kentish said.

“It has all the makings of an excellent debate.”

The debate will be filmed and made available soon after on the union’s website.

Previous speakers at the debating society include Sir Winston Churchill, Desmond Tutu and the Dalai Lama.

Let’s hope that this week’s discussion is just as stimulating as the last one was (video embedded below). Also be sure to check out the Christian Post report.