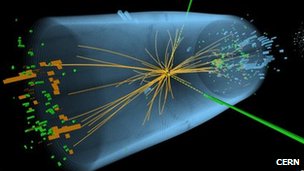 Some of Europe’s most prominent scientists have opened a debate with philosophers and theologians over the origins of everything.

The event, in Geneva, Switzerland, is described as a search for “common ground” between religion and science over how the Universe began.

It will focus on the Big Bang theory.

The conference was called by Cern, the European Organization for Nuclear Research, in the wake of its Higgs boson discovery.

Cern is the home of the Large Hadron Collider, the world’s largest particle accelerator, situated beneath the French-Swiss border region near Geneva.

The first speaker at the conference was Andrew Pinsent, research director of the Ian Ramsey Centre for Science and Religion at Oxford University.

He said that science risked “trying to turn society into a machine” if it did not engage with religion and philosophy.

“Einstein began by asking the kinds of questions that a child would ask, like what would it be like to ride on a beam of light.”

That, Dr Pinsent said, was what science should return to.

Prof Rolf Heuer, director of Cern, explained that the Higgs results provided a “deeper insight and understanding of the moments after the Big Bang”.

He added that he hoped, by the end of the conference, that delegates from very different backgrounds would be able to “start to discuss the origin of our Universe”.

Co-organiser Canon Dr Gary Wilton, the Archbishop of Canterbury’s representative in Brussels, said that the Higgs particle “raised lots of questions [about the origins of the Universe] that scientists alone can’t answer”.

“They need to explore them with theologians and philosophers,” he added.

12 Replies to “Science, Religion and the Big Bang: The Search for Common Ground”